Underqualified and Overpaid: Rookie salaries in the NFL

Share All sharing options for: Underqualified and Overpaid: Rookie salaries in the NFL

A little while ago I was asked to write an opinion paper for a class I'm taking on the subject of rookie salaries in the NFL.  With the draft just a few days away and the talk this week all about contracts, I thought my essay might be worth sharing.

I put it after the jump since it's kinda long. Hopefully you all find it informative. 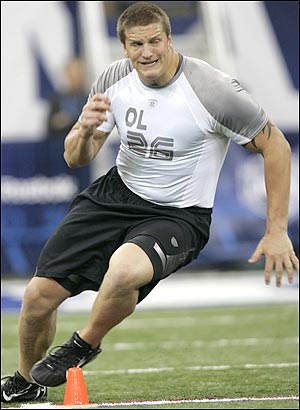 Last August, the Miami Dolphins' first overall draft pick Jake Long stepped into the locker room just like everyone else. Like everyone else he laced up his pads, studied his playbook, and listened intently to his coaches’ instructions. He wore the same uniform as everyone else and had gone to college before joining the team… just like everyone else. However, there were two major differences between Jake Long and nearly everyone else on the Dolphins. Long had never played one snap in the NFL and yet had just signed a five year $57 million contract. That contract would pay him more than nearly every other member of the team, most of which had proven their worth at the professional level for years. Long is just one example of the scores of unproven rookies entering the NFL and signing huge contracts. The contracts often become an albatross around the neck of the team’s finances and negatively impact the morale of its veterans. The current system of rookie pay in the NFL has become unsustainable, and a fairer system must be put in place.

College players enter the NFL through a draft. Each year every NFL team selects from the best college players in the country in reverse order of how the team finished. The worst team picks first and the best team picks last. The higher a team picks in the draft, the more money they are expected to pay the player they select. In the past decade, the salaries demanded by the top picks in the NFL draft have skyrocketed. If teams are unwilling to pay the higher salaries demanded by the top picks, that team risks the player showing up late or not at all for training camp. When a player is late for camp, he has less time to learn, get in shape, and bond with his teammates. At that point, the likelihood of the player helping the team that year is very low.
Speaking at a recent sports business summit, NFL commissioner Roger Goodell referenced the huge contract of Jake Long. 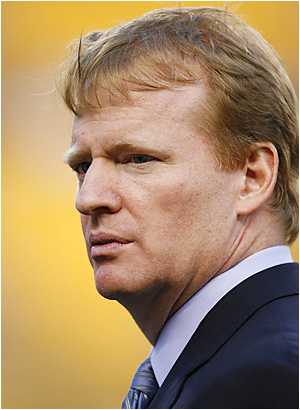 "He doesn't have to play a down in the NFL and he already has his money. Now, with the economics where they are, the consequences if you don't evaluate that player, you can lose a significant amount of money. And that money is not going to players that are performing. It's going to a player that never makes it in the NFL. And I think that's ridiculous."

Goodell’s point was that if Long doesn’t become a star player and earn the contract he was given, his team’s finances will be hamstrung. Their resources will be tied up in a player that simply isn’t giving them a return on their investment. The problem is, Miami was forced to pay Long the money without ever seeing him actually play in the NFL. He was a great player in college, and after conducting many interviews with him and studying game film the Dolphins felt like he could be a good player in the pros… but projecting how college players will fare against superior competition in the pros is an inexact science and often teams guess wrong.

In a recent article, Fox Sports columnist John Czarnecki cited the case of quarterback Ryan Leaf. Leaf was drafted in 1998 by the San Diego Chargers, who had been the second worst team in football the year before. Leaf signed a massive  five year $31 million contract with the Chargers after being a star QB in college. He went on to be one of the worst quarterbacks to ever play in the NFL. He won only four of twenty games he played in and within three years his NFL career was over. He was cut by the Chargers, then the Dallas Cowboys and never played in the NFL again. Had the Chargers had the chance to evaluate Leaf at the NFL level, they never would have paid him the $31 million he was given. If Leaf had been paid a salary commensurate with his experience, the Chargers could have easily cut their losses and moved on. It would take the Chargers six long years before they were able to field a winning team again thanks in large part to the disastrous selection of Leaf and the albatross his huge contract became on the team’s budget.

It is estimated that this year's first overall pick in the NFL draft will receive a contract with upwards of $36 million guaranteed. Last year, the Pittsburgh Steelers gave their quarterback, Ben Roethlisberger that same amount of guaranteed money. The problem is, Ben Roethlisberger has won two superbowls and is considered to be at the top of his profession whereas this years' first overall pick will be a complete unknown who has never even set foot in an NFL locker room. One man is being paid on merit and results, while the other is being paid on speculation and expectations. It simply isn't fair. 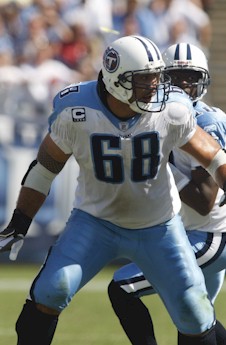 "As a guy who has been in the league for 14 now going on 15 years and being around other veteran guys, for a young guy to get paid that kind of money and never steps foot on an NFL football field, it's a little disheartening to think of," Mawae said. "It makes it tough for a guy who's proven himself to say 'I want that kind of money' when the owners, all they're going to say is, 'Well, you weren't a first-round pick."

Imagine this happening at your own job. Like Mawae you've been at your job for 14 years and been a top performer. You've been recognized by your company many times for exemplary work, but the company hires a kid straight out of college to do the same job as you at twice your salary. Even if the kid got good grades in college and is expected to be a good employee, he's still not a proven professional. This is the situation that faces many veterans in the NFL. While it's easy to say that they should act like professionals and always try their best no matter what, can you really blame them for at least being a bit disheartened?

Now, an opponent of a cap on rookie salaries might argue that we live in America. This is a capitalist country and a person deserves to earn whatever someone will pay them. Who are we to say these guys shouldn't be making untold millions before they prove themselves at the pro level? Well, being that this is a capitalist country an organization certainly has the right to alter the way it does business if it's current system isn't working and the current system of rookie pay simply isn't working. The will to change the system certainly seems to be there on both sides. The comments of NFL commissioner Roger Goodell, who represents the team owners, and the comments of president of the player's union Kevin Mawae, who represents the players, are in agreement. The two sides must work to forge an agreement that will allow teams to install a fairer, merit based system for rookie pay. Such a system would not force teams to tie up huge sums of money in unproven players and will make more money available league wide for players that have proven themselves at the pro level.  The New York Jets' player's association representative Jay Feeley summed it up nicely, "After three or four years if they come in and prove something, then they get that big contract"

The need for a fairer rookie pay scale is clearly there. The will for a such a scale certainly seems to be there from all parties involved. No other successful business pays unproven talent more than proven talent because it creates the very problems we are seeing in the NFL today. The negative impact on its finances and the morale of its employees.  Rookie salaries have ballooned out of control in the NFL and it's time for the league and its players to make the necessary adjustments to correct that imbalance.