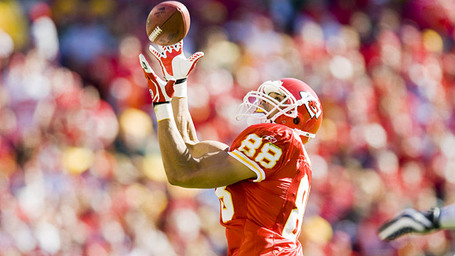 This has been mentioned in the fanposts, but Sports Illustrated's Don Banks hears that the Eagles may have become the most likely trade partner with the Kansas City Chiefs for future hall of famer Tony Gonzalez.

The buzz about the Chiefs resuming their attempts to trade veteran tight end Tony Gonzalez has restarted, and it sounds as if the Eagles might have nosed ahead of the Falcons as the most likely trade partner. Philly is thought to be willing to give up a third-rounder for Gonzalez. But Kansas City is seeking at least a second-round pick for a player it considers a future Hall of Famer, and may not be willing to bear the brunt of any criticism that could come if it's perceived to have given away Gonzalez too cheaply.

At 33 years old, a second or a third round pick would be a lot to give up for Gonzo... but the fact is that he's still probably the best TE in all of football and one of the greats to ever play the position. He would absolutely represent the major offensive weapon that many Eagles fan are hoping to add this offseason.

Throughout his career, Gonzo has remained remarkably productive and remarkably durable. He's a 10 time pro bowler and 9 time all pro. Even last year, on a really bad Chiefs team, he was fantastic.

I'd happily give up a third round pick to add a guy like this.