With the 27th pick in the BGN community mock draft the Indianapolis Colts select...

Share All sharing options for: With the 27th pick in the BGN community mock draft the Indianapolis Colts select... 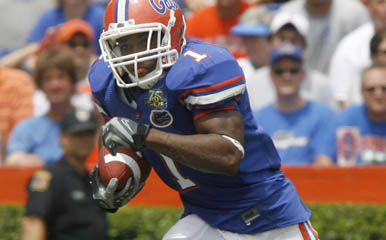 Repeat after me, the Indianapolis Colts do not waste first round draft picks. Let me throw a few of the Colts’ former first round picks at you; Marshall Faulk, Marvin Harrison, Peyton Manning, Edgerrin James, Reggie Wayne, Dwight Freeney, Dallas Clark, and Joseph Addai. Have you ever heard of any of those guys before? Bill Polian has the uncanny ability to pluck the best talent out of the draft even without the benefit of high draft picks.

Full analysis and commish take after the jump. Anuj and the Philadelphia Eagles are on the clock!

The biggest needs the Colts must address in the draft are DT, WR, LB, and RB, but Bill Polian is the type of guy that will take the best player on the board regardless of position, so all bets are off.

I have struggled with this pick, my initial reaction was to draft Peria Jerry, but since he is off the board I had to rethink whom to draft. I still think they will draft a DT but I like them to try and grab Fili Moala or Evander “Ziggy” Hood in the second round. I don’t see any LBs on the board that I am in love with at this point so I can’t see drafting for that position, which leaves me with WR or RB. So now my gut is telling me that the Colts will draft Hakeem Nicks. He has great hands, is a great route runner, and can adjust to the ball to make the catch. So he is the pick, right? Not a chance. Bill Polian has made a career out of shocking Colts fans for years, so the pick is going to be Percy Harvin.

How do I know Percy Harvin is the pick? Read this quote. "I've always approached the draft as take the best player no matter what the position is," Polian said. "Don't worry about filling a need, you can do that later in the draft. Take the best player in the first two rounds, whoever he is." Luckily for Polian the best player on the board happens to fill a few big needs.

Percy Harvin is versatile enough he can be used as a return guy, a wide receiver, and a third-down back. Last season the Colts ranked 28th in average kick return yards and tied for last place in punt return yards. Needless to say they would benefit greatly by having Harvin on the return team. One of Harvin’s weaknesses at the WR position is that he isn’t the most polished route runner, but I don’t believe the Colts need a route runner because they already have that type of receiver with Reggie Wayne. Harvin is the deep threat the Colts have been lacking since Father Time robbed Marvin Harrison of his 4.3 speed. At the RB position Harvin can lineup as a third-down back and be used as a receiving RB much like Reggie Bush. Harvin can be very effective as a running back in open space and if the Colts can concentrate on getting the ball to Harvin in the flat I believe he will be able to do some damage.

I realize that one of the reasons Harvin’s draft stock has fallen was due to the fact that he was often injured. While this concerns me, I have to take it with a grain of salt. I believe one of the reasons he was hurt so often was because he played injured. By playing injured he was more susceptible to even more injuries and was never given a proper chance to heal. Harvin only missed two consecutive games once in his career and for a guy that is perceived to be injured all the time that isn’t a whole lot of time to heal. I also believe that another factor that caused injuries was the fact that he was lining up at RB and running up the middle instead of being the receiving back I envision him being. The fact is out of 41 games during the regular and post-season Percy Harvin missed 5, and in the National Championship game when he was playing with a high ankle sprain and a hairline fracture he had 5 receptions for 49 yards and 9 rushes for 121 yards and a touchdown. Imagine what he could have done if he had been healthy. The time missed by Harvin is equivalent to missing 12% of his playing career due to injury or illness. In his final year at Florida, Harvin accounted for 21% of receiving TDs, 24% of rushing TDs, and 23% of total TDs. I’ll take a guy that on average will miss 2 games a year and still account for nearly a quarter of offensive touchdowns any day of the week. By comparison the Colts’ top two receivers for next season (Reggie Wayne and Anthony Gonzalez) combined for roughly the same percentage of touchdown production as Percy Harvin in 2008.

I hated picking Percy Harvin at first, but the more that I think about the more excited I get about the prospect. Harvin has been labeled a boom or bust pick, but if used correctly along with proper coaching and a solid quarterback I believe he has the ability to be a game-changer. I think that Harvin can be an impact player that will befuddle defenses and cause mismatches, and with those mismatches Peyton Manning will hurt you.

Commish take - Duff does has Bill Polian's draft strategy down pretty well. The Colts would be disappointed to see Peria Jerry off the board, they could take a guy like Brace from BC... but it would be more like the Colts to take just take the best player there.