With the 26th pick in the BGN Mock Draft the Baltimore Ravens select...

Share All sharing options for: With the 26th pick in the BGN Mock Draft the Baltimore Ravens select... 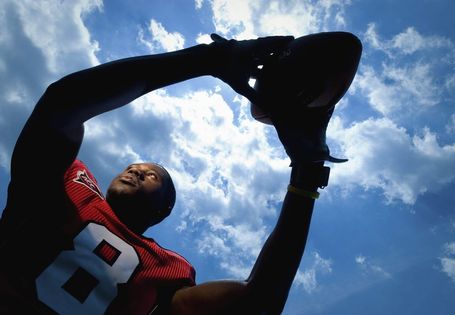 The Baltimore Ravens had a very successful year with first round pick Joe Flacco at quarterback in 2008. They finished 11-5 winning the last 5 of 6 and beat the Dolphins and Titans in the playoffs before losing to the Steelers in the AFC Championship.

This offseason they lost solid players in center Jason Brown, replaced by Matt Birk, and cornerbacks Chris McAlister and Samari Rolle. They should be set at cornerback in 2009 with the additions of Dominique Foxworth, who will certainly start, and Chris Carr who will compete with Fabian Washington for the other starting spot.

Another position of need for the Ravens is tight end. Veteran Todd Heap is not the player he once was and their other tight end is LJ Smith (enough said).

The most common prediction in mock drafts seems to be a wide receiver. Derrick Mason is coming off of his 7th 1000-yard season in 8 years but is showing signs of his age. Their other starting receiver is Mark Clayton continues to make some plays but is not a consistent enough option. It seems the Ravens are high on Darrius Heyward-Bey (DHB), inviting the local prospect in to catch passes from Flacco. Others believe the Ravens are also looking at Hakeem Nicks from UNC. Both players are bigger and faster receivers than any of the Ravens receivers so this seems like a nice fit.

Whatever GM Ozzie Newsome does will be based off his talent evaluations, which have been very good in the past. Seeing that the Ravens brought in young talent to replace their aging corners, they won't address this position early in the draft. With Pettigrew off the board, I doubt the Ravens would use their first round pick on a TE like Chase Coffman. Ozzie Newsome will pick whoever he views the most talented player at inside linebacker or wide receiver. In this mock draft it leaves James Laurinaitis and DHB. Based on how much interest the Ravens have shown to him, I am picking Darrius Heyward-Bey at 26 for the Ravens.

Commish take after the jump. Duff Honduras and the Indianapolis Colts are on the clock.

Commish take - The Ravens will probably be disappointed to see Vontae Davis come off the board one pick before them... but the fact that Heyward-Bey is still on the board will quell that disappointment. Big Silly did a great job highlighting Baltimore's needs and if certain guys had fallen to them maybe they would opt for a LB or CB over WR... but if the draft were to shake out like this I have no doubt the Ravens would snag Heyward-Bey. It's not often that you have your starting QB help workout a prospect, so it's pretty obvious the Ravens are interested in Heyward-Bey.

The prospect of Joe Flacco winging the deep ball to Heyward-Bey for the next 6 or 7 years should be a scary one for the rest of the AFC North.