What to do with Brian Westbrook?

Share All sharing options for: What to do with Brian Westbrook? 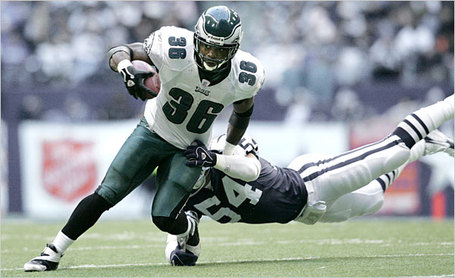 Everyone's favorite Eagles pundit G Cobb published an article on his site(not written by him) which asserts that Brian Westbrook should no longer be the "feature back" of the Eagles.

The writer suggests that the Eagles draft a top RB this year and limit Westbrook to only about 40% of the carries. In this scenario, the rookie RB would handle the majority of the carries.

The argument is that Westbrook is often banged up and getting older and limiting his touches will theoretically help to keep him healthier.

Here's the problem. Brian Westbrook is a threat to score on any play. Even last year where he missed some games and was slowed down with injuries at times he still was near the top of the NFL in total TDs. There are few guys in the NFL more dangerous with the football than Westbrook still is. If the Eagles lose a game where Westbrook was perfectly healthy and only carried the ball 40% of the time... has the team really tried its best to win? How could Andy Reid justify that? How would that be acceptable to the fans?

There's only one way to play in the NFL. All out, all the time. Every game matters and you do whatever you can to win every game. Unless home field advantage is already secured, the Eagles have to be putting their best lineup on the field at all times, and any combination of the Eagles best lineup includes Brian Westbrook.

If we're blowing teams out and don't need Westbrook to carry 20+ times a game then great... The idea of Westbrook healthy and fresh for the end of the season or the playoffs is nice... but we have to get there first. While I like some of the backs in this year's draft, it's highly unlikely that Moreno or Brown will be as productive next year as Brian Westbrook is likely to be. It's highly unlikely that either of those guys are going to win games like Westbrook does.

Now, I do agree that we need to draft a back and I'd like to see him get a bunch of touches... but not at the expense of Westbrook. Maybe the new RB could get some carries at the expense of McNabb's throws? Just a thought...

The best way to ensure Brian Westbrook is less effective next year, is to put him on the bench for most of the game.

By the way, be sure to check out Westbrook's fancy new player page.