Share All sharing options for: Local and national reaction to Jason Peters trade 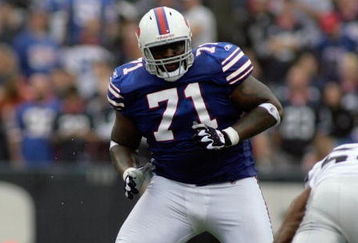 Pete Prisco thinks the trade for Jason Peters makes the Eagles offensive line the best in the NFL.

By trading for left tackle Jason Peters Friday -- the deal is pending a new contract and Peters passing a physical -- the Eagles might now be able to stake a claim as having the best line in the NFL, complete with brawlers and maulers.

I like this move by the Eagles, just like I liked the move to sign Stacy Andrews as a free agent from the Bengals. The Eagles line is now big, powerful and physical.

It is also young.

When the season starts, Jackson will be the oldest at 29. Stacy Andrews will be 28, Peters 27, Shawn Andrews and Heremans each 26.

I'll take that group right now over any other in the league for age, nastiness and talent.

Rich Hoffman was pretty plain in his feelings about the trade saying "Anybody who says they don't like this does not watch the sport."

The Buffalo News doesn't understand how the BIlls would strengthen their offense by adding TO, but then weaken it by trading Peters. I have to admit I wonder the same thing, this is why I never thought Peters would be dealt. Adding TO is "all in win now move," while trading away Peters is clearly not.

Good left tackles are like elite quarterbacks; they are very hard to find. When you get one, you better do everything you can to hold on to him.

I found it interesting that the Eagles, a perennial playoff contender, thought Peters was worth the big contract while the Bills, who haven’t sniffed the postseason in nine years, didn’t. I don’t get it.

Mike Florio thinks the Bills made a miscalculation by trading Peters now rather than at the draft.

Allen Wilson of the Buffalo News says the Bills have lost their best offensive lineman and most talented player, but also their biggest offseason headache.

Finally, a funny story by way of PFT. Top rated LT Jason Smith was literally in the NovaCare complex for a pre-draft visit with the Eagles when the news broke that they traded for Jason Peters.

"You hear all the right things and then 10 minutes later they say, ‘Oh yeah, we just got Jason   Sorry," Smith told Adam Schein and Jim Miller of Sirius NFL Radio on Friday.