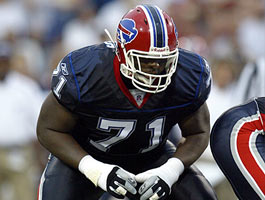 The Eagles have officially confirmed the blockbuster trade for Jason Peters and announced that they've signed him to a contract extension. ESPN has the details of the deal.

By Friday night, , according to a source, Peters had signed a four-year extension worth $53 million in new money. The Eagles acquired him with two years remaining on his Bills contract. In total, Peters will make $60 million over the next six seasons.

The extension puts Peters' contract right in the line with the 6 year $60 million deal Jordan Gross signed a few weeks before the start of free agency.

Combine Peters' new deal with the $40 million deal Stacey Andrews signed a few weeks ago and the Eagles have spent well over a hundred million dollars in free agency this year. Don't ever say the Eagles are cheap...

In a very adjective laced story, the Eagles website had a statement from Andy Reid.

"Jason Peters is the best left tackle in football," said head coach Andy Reid. "He is a powerful and athletic tackle and I have admired his play over the last few years on film. I have always believed that success in the National Football League is derived from the strong play of the offensive and defensive lines. This offseason we have added two young, top-flight offensive linemen in Jason and Stacy Andrews."

Peters was a college teammate of Shawn Andrews.

After the jump check out the ESPN NFL Live discuss the Peters trade.