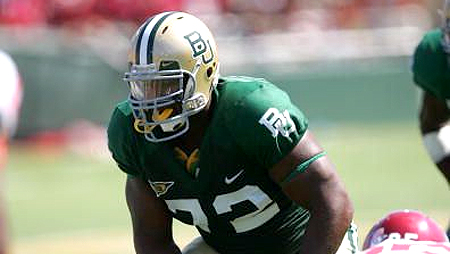 PFT by way of Scout.com is reporting that Baylor OT Jason Smith is in Philadelphia today to meet with Eagles executives. Smith could possibly be the #1 overall pick in the draft.

If the Eagles have indeed met with Smith, that would mean they've entertained both of the draft's top OTs. It was reported a few weeks ago that Eugene Monroe had a private visit here as well.

This doesn't seem like a smokescreen to me. I'm not sure that the Eagles would move into the top 3 if that's what it took to get one of these two guys, but if either start to drop I do believe the Eagles will be burning up the phones in an effort to move up.

Recently, in an interview with PE.com, Eagles GM Tom Heckert did say that the Eagles had the ammunition to move into the top 5 picks of the draft.