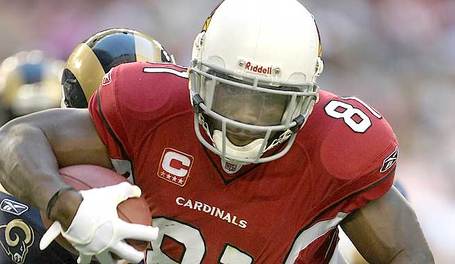 Yesterday, Arizona Cardinals' coach Ken Whisenhunt made what I considered to be a rather benign statement about the team's situation with disgruntled WR Anquan Boldin.

"Before the draft, you know there is going to be talk about Anquan and his situation and a trade," Whisenhunt said. "Since not a whole lot has changed with his contractual situation, we know that will come back. It would be foolish from out standpoint not to listen to those opportunities and see what actually exists. But I want to make the points -- our goal is to re-sign him to a long-term deal. That hasn't changed."

This isn't different from what Cards' GM Rod Graves has been saying for the past year. However, ESPN's Sal Paolantonio is stoking the fire by reporting that the Cardinals have a set a price for Boldin and that guess who is interested?

ESPN’s Sal Paolantonio reports that the Arizona are telling prospective suitors for receiver Anquan Boldin that at least a first-round pick and a third-round pick will be needed to get the deal done.

Per Paolantonio, the Eagles, Giants, Jets, and Ravens have shown interest.

We get these stories every offseason. A WR is rumored to be on the block and the Eagles are supposedly interested. While I have little doubt that Boldin would do great things here... should we believe this rumor more than any other over the past few years?