WR Hakeem Nicks in Philadelphia for a visit

Share All sharing options for: WR Hakeem Nicks in Philadelphia for a visit 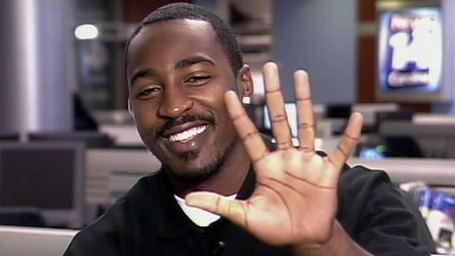 According to PFT, UNC WR Hakeem Nicks is in town for a visit today. The 6'1 210lb WR is expected to go in the first two rounds.

Strengths: Arguably the top route runner in this year's class, Nicks is a reliable target with very good hands. Runs crisp routes and has good quickness out of his breaks. For a receiver, Nicks has good strength. Cornerbacks have to be sound tacklers to take him down in the open field. Gives some safeties trouble when he gets a head of steam. Has good awareness of the sideline when he's up in the air. Knows how to really attack a zone. Easily locates the hole and is patient enough to sit in them until the pass arrives.

Weaknesses: Really lacking good speed. May test well due to offseason workouts, but Nicks doesn't play especially fast. A little slow off the blocks. Played in an offese that has several quality targets, which often gave Nicks one-on-one coverage. Has serious ball-control issues after the catch. Nicks need to learn how to tuck the ball high and tight as he'll occasionally get the ball knocked out of his hand.

Final word: Nicks entered the draft, following a stellar junior season in which he had 1,222 yards receiving and 12 touchdowns, both records at North Carolina. After Michael Crabtree, a real argument could be made that Nicks has the best hands in this class. He's also a polished route runner and strong after the catch. So long as teams aren't relying on him as a deep threat, Nicks should excel in the pros.

After the jump is a pretty impressive example of Nick's superior hands.