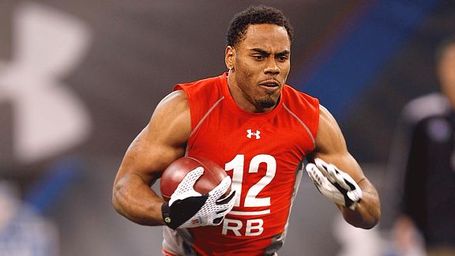 Multiple reports have said that Liberty running back Rashad Jennings has had a private visit with the Eagles. Scout.com even says that the Eagles and Bengals are the two teams that have shown him the "most interest."

Jennings is a bog back at 6'1, 235 and runs a 4.52 40. Last year at 1-AA school Liberty he rushed for 1,500 yards and 17 TDs. He's projected to come off the board in the 2nd or 3rd round. He was originally recruited to play for Pitt, but transferred to Liberty to be closer to his Dad who was suffering from diabetes.

Strengths: Looking at Jennings, the first thing that pops off the screen is his size. He's a tall, powerful back who is hard for opponents to take down. Combine that with good athleticism, and Jennings has the makings of a solid rusher in the NFL. Jennings has also developed into a receiving option and increased his receptions every year. Has some speed to break long runs when he gets into the open field. Above average as a blocker.

Weaknesses: While Jennings certainly has power, he doesn't always run like it. He doesn't have a consistent forward lean when he goes down. He also needs to do a better job of breaking ankle tackles. Unlike smaller backs, Jennings isn't incredibly shifty and won't make a lot of guys miss. Stiff hips. Has had some work ethic issues early in his career and saw his weight fluctuate greatly. Missed two games in 2007 due to an NCAA rules violation. Has to improve his route running to be a factor receiving in the NFL.

Final word: Largely an unknown to most football fans, Jennings is a transfer from Pittsburgh. There, he was the team's second-leading rusher as a true freshman in 2005. Jennings impressed with a solid week of practice at the East-West Shrine Game. Even though he played at a lower competition level, his game should translate to the NFL. He might just have to be in a rotation with a shifty speed back to be best utilized.