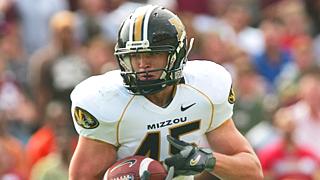 PFT is reporting(by way of Scout.com) that Missouri TE Chase Coffman has taken an official visit with the Eagles. Coffman is clearly the most productive TE avaialable this year coming off a senior season where he caught 90 passes for 987 yards and 10 TDs. Coffman is the all time division 1A leader in receptions by a TE.

Also, at 6'6 252 pounds Coffman has great size and could become a very dangerous weapon in the red zone.

Strengths: Coffman has impressive size for a tight end. He uses that size to create space to get open. Coffman also utilizes great quickness off the line of scrimmage. A consistent prospect who routinely finds himself open. Possesses incredibly reliable hands and makes a lot of difficult receptions. Doesn't catch with his body. Runs excellent routes, much like a receiver. A strong athlete who rarely goes down on first contact.

Weaknesses: The biggest drawback in Coffman's game is his blocking inexperience. In Missouri's offense, he would often line up as a receiver and hasn't had to block much. Doesn't appear to have great speed and isn't a deep threat. Due to foot injuries the last two seasons, there are durability questions about Coffman. He was slowed during his senior year with turf toe and broke a bone in his left foot in the Alamo Bowl. Had offseason surgery following the 2007 season due to bone spurs.

Final word: Coffman will need to improve some as a blocker, but has the tools to become a great tight end. Coffman has been one of the nation's top tight ends since his true freshman season at Missouri. Chase's father, Paul, played tight end for 10 years in the NFL. Won the Mackey Award for a 2008 season in which he had 90 receptions for 987 yards and 10 touchdowns.

The Mackey award is given to the nation's top TE.