With the 25th pick in the BGN community mock draft the Miami Dolphins select...

Share All sharing options for: With the 25th pick in the BGN community mock draft the Miami Dolphins select... 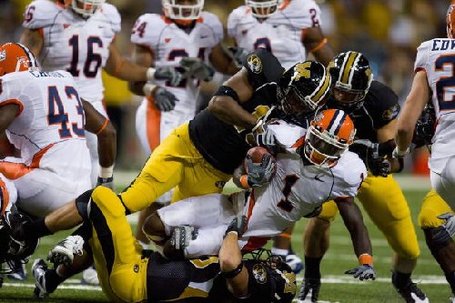 The Dolphins are coming off of one of the most spectacular turnarounds the league has ever seen. Number 1 overall pick Jake Long made the Pro Bowl in his first season and anchored an offensive line that was a large part of the 10 win turnaround and playoff experience coming off a 1-15 2007 season. The Dolphins have a brain trust in GM Jeff Ireland and Head Coach Tony Sparano, with Bill Parcells as team President to oversee everything, that knows how to win in the NFL.
The Dolphins are a team with a lot of young talent. At QB, the Dolphins have Chad Henne ready to take over for Chad Pennington in 2010. At RB, the duo of Ricky Williams and Ronnie Brown has shown the NFL what having two RBs sharing the time can do, especially with Brown's talent at running the Wildcat offense, and while they'll have to replace Williams at some point, it's not a need this year (except for depth). Anthony Fasano and David Martin are the TEs, and while it's a position that needs improvement, they don't need to use their first round pick on a TE. The OL has one of the game's better young duos at tackle with Jake Long on the left side and Vernon Carey on the right, and they improved at center with the signing of Jake Grove and the trading of Samson Satele. DL is a possibility early in the draft, but the Dolphins have several draft picks from last season, particularly second round pick Philip Merling and third round pick Kendall Lankford, who will get some looks. The Dolphins have a spectacular LB crew with Joey Porter and Matt Roth on the outside and Channing Crowder and Akin Ayodele on the inside, and while they'll think of grabbing a LB to eventually replace Porter, the value at LB isn't there at this point in the draft given their other needs. The Dolphins also have one of the better safety duos in the game with Gibril Wilson and Yeremiah Bell.
Even given the turnaround, this team has needs. The Dolphins two biggest needs, in no particular order, are:
1. Cornerback: The Dolphins lost starting CB Andre Goodman to the Broncos in Free Agency, and while they have holdover CB Jason Allen and signed Eric Green from the Cardinals, they're in need of improvement. Will Allen has played well but isn't a top flight corner, and could be in trouble if the talent isn't there at the other CB slot and he's matched up against the other team's top WR. In a division where the Dolphins have to face Randy Moss and Terrell Owens 4 times a year, CB play is key.
2. Wide Receiver: Similar to the Eagles, many Dolphins fans think the biggest question the Dolphins have is at WR; but it's far more accurate for the Dolphins. Ted Ginn Jr. has been a disappointment since the Dolphins made the wildly unpopular (with fans) move to pass up Brady Quinn with the #9 pick in the 2007 draft to take Ginn. Greg Camarillo, who's probably most known for catching the ball in OT against the Ravens leading to the Dolphins' only win of 2007, showed improvement last year, but he lacks the talent to be a top two WR in the NFL, and he is coming off knee surgery. The Dolphins' best talent at WR may be Davone Bess, who was signed as a rookie free agent last season out of Hawaii. Bess showed potential in flashes at times last year, but his best value is likely as a return man and a slot receiver.
Davis is the pick because given the Dolphins' needs, he's the best value at this point in the draft. Yes, there are questions about his work ethic, and that could be enough to turn off a team whose GM and head coach were tutored by Bill Parcells. But Davis' abilities as a top-flight shut down corner, along with his return ability, will be too much for the Dolphins to ignore. If Davis is able to do something his brother, 49ers TE Vernon Davis, hasn't done to this point -- translate his natural athleticism into play on the field -- he's the best cornerback in this draft. This is a draft deep in wide receivers, and there's talent that will be there when the Dolphins make their first of two second round picks at #44 overall (which they acquired from the Redskins in the Jason Taylor trade), where they could take a talented WR like Kenny Britt or Brian Robiskie.

Commish take after the jump. Big Silly and the Baltimore Ravens are on the clock.

Commish take - With all the bigtime LBers coming off the board already, taking a corner makes the most sense for Miami. They could use a WR, but would Parcells actually take one this high? I agree that he'll go defense.