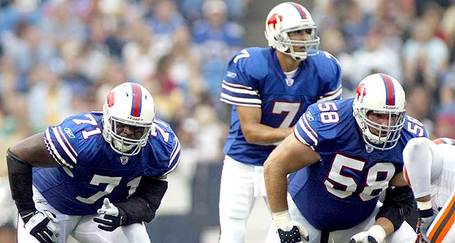 There's been a lot of talk lately about the availability of Bills' pro bowl LT Jason Peters and the Eagles interest or lack thereof in trading for him.

The most recent report mentioning the Eagles as a possible landing spot for Peters was posted in the fanshots earlier.

I was contacted by Brian Galliford of Buffalo Rumblings for a Philly perspective on the rumors. You can check out my answers to his questions over there... but Brian, who gets some good inside info on the Bills, did answer my one burning question. Do the Bills even want to trade the guy?

The Bills are, however, (going to be) serious about trading him.  Peters' contract demands are currently through the roof - he's looking for 5 to 6 years with annual salary in the Jordan Gross/Jake Long range and at least $30 million guaranteed.  He literally wants to be the highest-paid tackle in the league - at least, if he's doing his playing in Buffalo.  For the small-market Bills, facing a potentially uncapped 2010 season, those demands are a bit unrealistic, particularly when considering his unreliability on the field.

I have a hunch that, were Peters to be traded, his contract demands would drop significantly.  Everyone who pays the slightest bit of attention to the NFL knows that Peters isn't the best tackle in the game (though, again, he's played like it for stretches), and he shouldn't be paid as such.  Peters and his agent, Eugene Parker, have to realize this as well.  They have showed zero willingness to budge from their demands during "negotiations" with the Bills.  My guess is that the motive behind that approach is that they're trying to force a trade.  Buffalo may not want to deal him, but they will most certainly seriously explore doing so.

The problem isn't his talent or, really, his work ethic - he's always been in good shape (and he was even after he held out last year; he just wasn't in "playing" shape).  It's that Peters, by and large, is a pretty weird guy.  This is a player that, as an undrafted free agent tight end, was very carefully molded into a two-time Pro Bowl left tackle by the Bills franchise.  Along the way (in 2005), they gave him a five-year contract extension based solely on the faith that he'd amount to something - he hadn't played a lick at that point.  There is no loyalty on Peters' behalf - we're not blaming him for wanting to be compensated fairly, but for his holdout tactics last year (no communication with the team for several months) and his negotiation tactics this year.  This is a guy that has publicly stated that you play the game to make the Pro Bowl.  He'll work his butt off for the team and make players around him better, but he doesn't do it for the team, if that makes any sense.  I have a hunch that at least part of the brain trust in Buffalo wouldn't mind seeing him gone - he's been frustratingly inconsistent, and some have speculated that some of that inconsistency was pre-meditated.

He was a model citizen through the close of the 2007 season.  If he gets his wish and is playing in a new city this coming fall, I have little doubt he'll return to model citizen status.  Every action of his over the past year and a half screams of his desire to leave Buffalo.  It's incredibly unfortunate, but players do have some leverage when they're as talented as Peters is.

I also asked Brian whether he thought the team has all the leverage in the contract dispute?

They certainly have some leverage, but Peters also has leverage as well, as detailed above.  You're absolutely right - the Bills don't want to deal with a holdout; in fact, they will not.  The team is hell-bent on getting something done by the end of the draft, whether it be a new deal or a trade, for that exact reason.  They're not going to let the situation fester as they did last year, because once they got him back, Peters came with baggage and a long stretch of consistent play.  The team is in win-now mode; Dick Jauron needs a playoff season to keep his job beyond 2009.  They're not going to risk deja vu with Peters.  Either he's signed and participating in all workouts, or he's wearing a different uniform.  Those are the only two options.

Thanks to Brian for the info. Check out my thoughts over at Buffalo Rumblings.