Owens shuffles off to Buffalo

Share All sharing options for: Owens shuffles off to Buffalo

After the majority of the NFL publicly disavowed any and all interest in Terrell Owens, the ex 49er/Eagle/Cowboy signed a one year deal with the Buffalo Bills. With a second year QB and a media market much smaller than TO is used to, "the player" knows it'll be different. 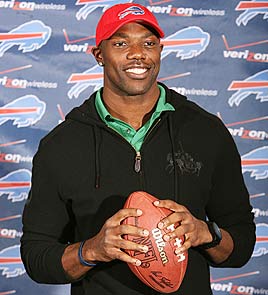 "I'm leaving America's team (for) North America's team," Owens said at a news conference. "This may not be the most ideal place for a lot of people, but I'm the guy. I beat to my own beat sometimes, my own thinking, my own intuition."

Of course, like he has for years in Dallas TO couldn't resist deflecting blame and defending the exit from his previous team.

"That's all hearsay," Owens said. "If you look at all of the comments that have come from all of my teammates with the Cowboys, it's all been positive. Prior to that, I can't really ... I don't really want to get into it. I'll let my teammates speak highly and I think they have done that. They've spoken and they speak loudly as to what transpired."

The Bills haven't made the postseason in 9 years. They have a second year QB and an offense that has been in the bottom 4 for six straight years. Many Bills fans are already singing the familiar chorus that Eagles and Cowboys fans before them did, "He can change, he knows he needs to behave this time!"

TO will turn 36 years old this season, the only thing that's likely to change with him is his ability to remain effective.

I've also noticed many Bills fans talking about the exposure and attention this will bring. I think many Dallas fans would join me in warning that this isn't the type of attention anyone wants. The fun of seeing ESPN anchors camped out in front of your locker room wears off very fast...

But hey, it's only a one year deal... the risk for Buffalo is minimal. However, we all know how this is going to end.