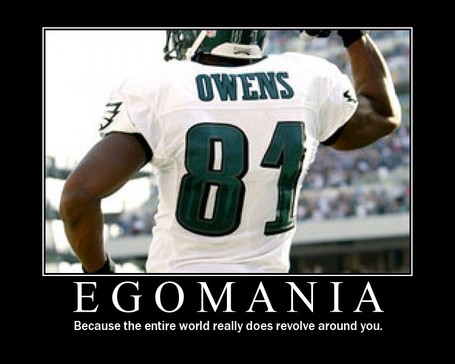 It was bound to happen. Just like it did in San Francisco and Philadelphia before, Terrell Owens has once again worn out his welcome and been cut. Is anyone in the least bit surprised?

Surprise, surprise TO proved to be an awful teammate and tried his best to tear an organization apart. In this case, he has my gratitude.

Not only did Owens have relationship issues with quarterback Tony Romo and tight end Jason Witten, but the receiver consistently criticized offensive coordinator Jason Garrett's play calling and his offensive schemes to the point that sources say Garrett does not believe they can coexist.

While the Cowboys were trying to downplay a possible rift between Owens and Witten during the season, the two reportedly came close to blows in mid-December.

An incident occurred at the Cowboys' training facility when Witten tried to engage Owens in a conversation about a pass route. Owens told Witten to stay away from him and called him a name. The two exchanged words before being separated.

Clashed with coaches and teammates? Yeah, that's the TO we know. To be honest, I'm sad to see him go. I enjoyed the constant drama and disappointment in Dallas the past few years. It should also be interesting to hear the thoughts of all the Cowboy fans who deluded themselves into thinking their team was somehow more able to deal with this cancer than Philly or San Fran were... Just as interesting will be the fans of his next team doing the same thing.

Last year, Owens was rewarded with a 4 year $34 million dollar deal. Reportedly, Dallas will take a cap hit over $9 million to cut ties with TO. A small price to pay.

And seriously if anyone has any fantasies of him coming back here... forget it.