With the 23rd pick in the BGN community mock draft the New England Patriots select...

Share All sharing options for: With the 23rd pick in the BGN community mock draft the New England Patriots select... 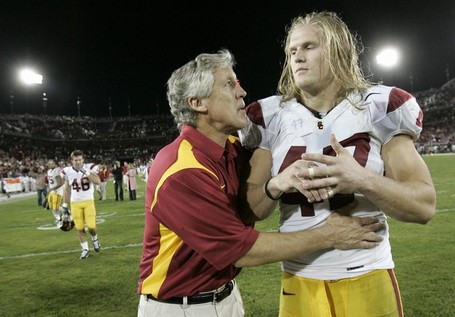 You can only be envious of the Patriots heading into the '09 draft with picks at 23, 34, 47, 58, 89, 97. Currently neither Jason Taylor nor Julius Peppers reside on this roster, and even if they were, my primary focus as the Pats GM is to get younger at LB and sure up the secondary.

You have to acknowledge that one of the hardest things to evaluate with this time of year, is how important is football to these potential draftees. To that point, based on his bloodline and resume, there's no surer thing in this draft, than Matthews.

It was an uphill battle but Matthews went from USC walk-on, to redshirt, to special teams player, to prized substitute to last season, starter on the countries' best defense. As a senior Matthews excelled at the playing a hybrid DE/LB role for the Trojans. At 6'3", 240 he'll likely end up playing both ILB and OLB for the Pats. He'll also be an absolute terror on special teams bringing his kick blocking knack to the NFL.

Some characteristics used to describe Matthews around the web are: versatile, instinctive, worker, total team guy, special team standout, quick, Vrabel-like, an overachiever with high upside, and strong IQ. Matthews presents a near perfect player for Belichick to mold to the likes of Vrabel and Bruschi. Whatever he lacks in coverage ability he makes up for in instinct and quickness.

While Matthews was originally pegged as a 2nd round talent, he's a surefire 1st round talent worthy of this pick here following an impressive Senior Bowl and combine. USC's pro-day today just gives him another chance to showcase his talents, continue fighting that uphill battle and finding success along the way.

Matthews is an ideal player for Belichick's defensive scheme. With his high football IQ and ability to quickly read plays Matthews will be a nice complementary player to Mayo on the inside. By this time next round the Pats are likely to have rounded out a linebacker core that will have Pats fans forgetting about the LB core of old and looking forward to a LB of new.

I could go on and on talking about other players I considered here, but I'm playing the role of Belichick. With that I'll just conclude saying that we pick again in 11 spots, we're going to end up getting one of those guys anyway and I have no further comment.

Commish take after the jump. Super Charles and the Atlanta Falcons are on the clock.

Commish take - Matthews certainly seems like a Belichick kind of guy plus it's certainly need for the Patriots. The Providence Journal has noted Matthews as a possible Patriots target.

Yes, for a variety of reasons. While Matthews is listed as an outside linebacker, his size is more suited to inside in a 3-4 system, and he’s been tabbed for his “Vrabel-like” versatility; while with the Patriots, Mike Vrabel played both outside and inside linebacker, and New England needs more depth inside.

My one reservation about the pick is Bill Belichick's philosophy. He seems to like players with good college production and that have played alot. That's not Clay Matthews, who started just 10 games at USC. Everything else about him seems like he'd be a perfect fit in New England. Maybe they won't care about the relative lack of experience.