With the 22nd pick in the BGN community mock draft the Minnesota Vikings select...

Share All sharing options for: With the 22nd pick in the BGN community mock draft the Minnesota Vikings select... 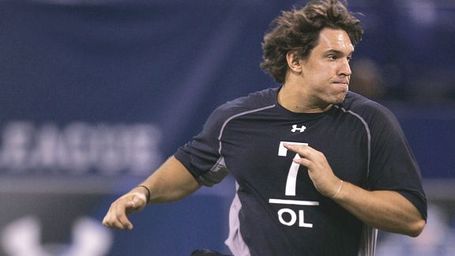 Brad Childress is on the hot seat and needs a player that can make an immediate impact. Eben Britton is just that player. Besides, the Vikings Offensive Line isn’t getting any younger. I’ll admit, I was tempted to pick a WR like Percy Harvin (Florida) or Hakeem Nicks (North Carolina), but I think I may be biased after watching rookie sensation DeSean Jackson last year. The truth is, rookie WRs don’t usually contribute immediately like DeSean did.

Temptation # 2: Vontae Davis. By placing a shut down corner opposite Antoine Winfield, I would have created a monster of a defense. And let’s face it: Winfield really only has a couple of years left in him. The Vikes have some hard hitting safeties and a formidable front line; Davis’ presence would (should?) wreak havoc on opposing Offensive Coordinators who would have to add him to the list of worries when going up against players like Winfield, Darren Sharper, Jared Allen, and even Pat Williams! But does growing up in the same household as Vernon Davis mean that Vontae will have the same work ethic? Hmmmm… Pass.

So I’m back at the offensive line, which is certainly in trouble. They were mediocre-at-best even with 6 time pro-bowler Matt Birk, who just signed with Baltimore after 11 years in purple. They ranked 28th in sack rate, and they ranked 15th in Football Outsiders’ adjusted line yards. Their current RT is catching criticism as being inadequate at that position, and by drafting Britton at this position in the draft – it may just sooth the pain a little bit after fan favorite Birk’s departure. (Incidentally, I wouldn’t be surprised if Minnesota targets a center and drafts Alex Mack (California) or Max Unger (Oregon) to take over snapping duties.)

Final thoughts: there was word that the Vikings were set to make serious runs at Jordan Gross (Carolina) and Vernon Carey (Miami) in free agency before they re-signed with their respective teams. So that right there shows how serious they are about upgrading the RT position. By signing this 6’6 310 bookend, not only will "Purple Jesus" (Adrian Peterson) find more running room, but maybe we can determine once and for all if Tavaris Jackson has what it takes.

Commish take are after the jump. AndyReidswasitline and the New England Patriots are on the clock.

Commish take - It's true that the Vikings were looking to bring in a RT in free agency, so it stands to reason they'd take a guy like Britton here. WR Percy Harvin is a real possibility here as well. There's a few ways the Vikings could go with this pick.