With the 20th pick in the BGN community mock draft the Detroit Lions select...

Share All sharing options for: With the 20th pick in the BGN community mock draft the Detroit Lions select... 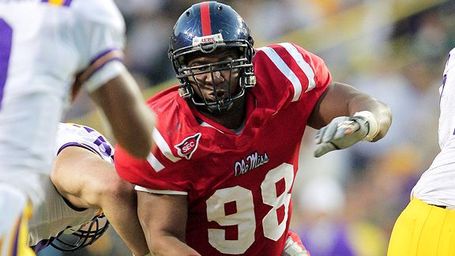 I was put in a difficult position when it came to this pick, because my co-GM Whodie selected Eugene Monroe with our 1st overall pick. Not that I disagree with that pick, as I think one of our most pressing needs was a LT, and with the money being paid to 1st overall picks these days a team like the Lions needs as close to a sure thing as possible. However, it is comical that the even in our mock draft, the Lions are dysfunctional.
If I were the sole GM, I would have considered OL, QB and DL our 3 targets in the early rounds of this draft. With 2 picks in the 1st round, the top pick in the 2nd round, and 2 picks in the 3rd round, the Lions should be able to pull of the start of a re-building turn-around. When Whodie selected Monroe with our first pick, I quickly turned my attention to either Mark Sanchez or Josh Freeman (I didn't think it was realistic for Stafford to fall to us at 20). When Sanchez went 4th overall and Freeman went the pick before me I was dissappointed. If trades were allowed I would consider moving this pick and possibly the 3rd rounder we acquired from Dallas to Denver for Jay Cutler, but I am not sure they would go for it with no QB in return and none they would be comfortable starting available with this pick.
Therefore, I turned my attention to DL. I subscribe to the Andy Reid philosophy that games are won in the trenches, and you build your team from the line of scrimmage out. The Lions finished last in rushing yards per game allowed, and bottom 10 in passing yards per game allowed. I believe that a top defensive lineman will help both causes. The Lions actually have a usable DE in Dewayne White at DE, and signed an aging, but still effective Grady Jackson at DT, so I was fortunate enough to choose best available player between end or tackle. Looking at the options remaining, it came down to Robert Ayers vs. Peria Jerry, as they are the top-rated DE and DT remaining on almost every rating system I have looked at.
Considering both the present (potential Miami Dolphins-like turnaround) and future, the Detroit Lions select Peria Jerry with the 20th overall pick in the 2009 NFL Draft.
Overview - Possesses rare burst off the snap, lateral quickness and a nose for the football. Emerged as one of the flashiest prospects at any position in the 2009 draft. A highly touted prep prospect, Jerry spent the 2004 season with Hargrave Military Academy before arriving at Mississippi. He broke out as a junior, earning second team All-SEC accolades by finishing with 58 tackles, including 14 tackles for loss. Often faced two blockers in 2008, when Jerry improved his play behind the line and led the SEC with 18 tackles for loss. He was a four-time SEC Defender of the Week as a senior, and raised his stock even more with a dominating week of practice at the Senior Bowl. (nfl.com)

It came down to that fact that Jerry provided exactly what the Lions need right now, a 1-gap penetrator to play next to Grady Jackson, but also possesses the ability to improve vs. the run down the line as he gets stronger. Ayers has been climbing up draft boards recently with his impressive showings, but was too much of an unknown commodity until this past year, and the fact that he lacks top-notch speed off the end made Jerry the pick.

Commish take after the jump. Foos5 and the Philadelphia Eagles are on the clock!

Commish take - Does anyone else feel like this guy's name is backwards? I always thought it was odd. Either way, I don't think the Lions can really go wrong with this pick if they come away with a quality player at any position. When you go 0-16 you need help everywhere. I do agree that they'd probably be disappointed to see all the top QBs come off the board before now, but Jerry is good value here and will upgrade the interior of their defense.