With the 19th pick in the BGN Community Mock Draft the Tampa Bay Buccaneers select...

Share All sharing options for: With the 19th pick in the BGN Community Mock Draft the Tampa Bay Buccaneers select... 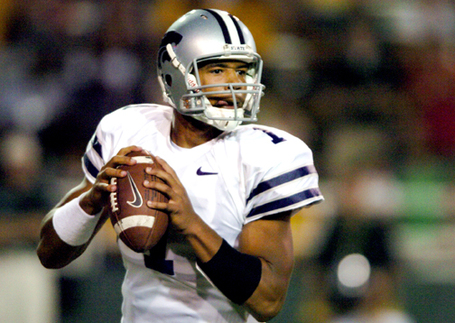 The Buccaneers have a lot of needs. After a 9-3 run to start the 2008 season, they looked like a squad that could win the NFC South and go deep into the playoffs. Then everything collapsed. A loss to Carolina, an injury to Earnest Graham, troubling QB play, questionable defense that suffered when Monty Kiffin announced he'd be going to Tennessee, questions in the locker room about Gruden's integrity, and just about every nightmare a team can have short of losing to Oakland and getting knocked out of the playoffs. Oh... Ouch.

After changes in General Manager, Head Coach and a large portion of the coaching staff, the Bucs are definitely entering a new era. They have some great pieces: MLB Barrett Ruud will thrive in new DC Jim Bates' Run Contain defense and should lead the NFL in tackles if he stays healthy; Antonio Bryant showed up big last season and should return just as strong because he'll be playing in a contract year for the second time; the backfield features Graham and new FA signing Derrick Ward; Ronde Barber still is a top corner in the league, and second-year CB Aqib Talib tied him for INT's last season. They re-signed DT Ryan Sims and safety Jermaine Phillips and have solid younger players like Chris Hovan and Jeremy Trueblood on both sides of the line. If restricted free agent Donald Penn can get a deal done, the Bucs won't have to worry too much about their O-line. With the addition of TE Kellen Winslow via trade with Cleveland, their offense is stacked. Except at quarterback (Sorry, Mr. McCown).

And it appears that the front office knows it. In fact, they already tried to use their first pick on that position with Broncos QB Jay Cutler. Still, in preparing to draft, there were other positions I considered. Despite the re-signing of Ryan Sims, the Bucs will be looking for a huge DT like Mississippi's Peria Jerry to fit their scheme. They'll want a second stud WR like Florida's Percy Harvin, or a CB like Vontae Davis to ease into Barber's spot. They could grab a capable OLB who can strengthen that position (even considering their recent signing of Angelo Crowell), and there are some talented DE's available at this spot that could relieve some pressure on Gaines Adams. But these were really just considerations that I made because I wasn't sure Freeman would make it past the Jets at 17. The fact is, history indicates new GM and HC pairings go for QB's high. We know this from when Big Red took over both spots and took McNabb. But we also know it from this offseason when Scott Pioli and Todd Haley traded for Matt Cassel (Xanders and McDaniels tried to also), or last season when Mike Smith & Tom Dimitroff took Matt Ryan and Bill Parcells & Tony Sparano took Chad Henne. In '06 Brad Childress and Rick Spielman took Tarvaris Jackson in the second. The Texans gave David Carr a year then dealt for Matt Schaub. The list goes on and on. It even goes back to when Marty Schottenheimer and King Carl Peterson both started in Kansas City. Sure enough, 34th overall in the 1989 draft: QB.

After missing on Jay Cutler, and facing a big dropoff in talent after Freeman, I don't think the Bucs will pass on a passer. Here (http://www.mockingthedraft.com/2009/1/30/738261/scouting-report-josh-freem) is what Mocking the Draft had to say about his strengths:

"Incredible arm strength. Can make just about any deep throw. Puts a nice touch on passes and knows when to take some heat off throws. Great size and can take a hit. Never had the best offensive line protecting him and was pressured frequently. Showed during his junior season that he can be mobile rushing for 14 touchdowns. Cut down on his interceptions ever season but still needs to improve his decision making. Played in a pro-style offense, albeit mostly from the shotgun."

It might not make Bucs fans the happiest, but it's the pick that draft trends best suggest. Plus, why else would Earnest Graham be in the media comparing Luke McCown's athleticism (http://blogs.tampabay.com/bucs/2009/03/earnest-graham-likes-bucs-offensive-direction.html) to Michael Vick and Vince Young's if not to fool other teams and let Freeman drop? Is he serious?

Commish take after the jump. Hratner and the Detroit Lions are on the clock.

Commish take - This pick is very reminiscent of the Raven's pick of Joe Flacco last year. At 6'6 with a huge arm and coming out of a pro style offense in college, Freeman could possibly adapt to the NFL as quickly as Flacco did. Freeman is certainly becoming a very popular pick for the Bucs in mocks around the web so it wouldn't be a huge shock to see them take him. Add in the fact that new Bucs coach Raheem Morris was at Kansas State when Freeman started as a freshman and possiblities start to get even more interesting.

The Bucs could also use an outside linebacker, so Clay Matthews or Clint Stintim are possiblities here.