The Eagles announced today that they will be hosting former Redskins CB Shawn Springs on Wednesday and Thursday. 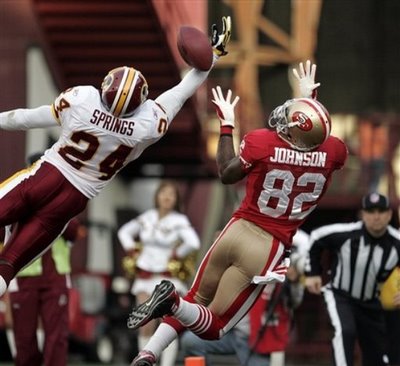 The 12 year veteran would add some size to the Eagles secondary, at 6'0 he would be the Eagles tallest corner. A move for a veteran corner does raise some questions...

The Eagles are expecting last year's 4th round pick Jack Ikegwuonu, who spent last year on IR, to make an impact this year. We've heard several times that talent wise Jack probably would have been a second or late first round pick, but an injury and off the field issues pushed down his value and the Eagles landed him in the 4th round.

In all likelihood Springs would simply provide a one or two year insurance policy at the position. One injury to a CB and a guy who is basically rookie and coming off a knee injury would be forced to play significant time. A solid veteran in Springs would be a nice piece to fall back on.

However, if we want to look to far into this and get a nice conspiracy going... Could the interest in Shawn Springs mean the Eagles might be thinking about the long rumored move of Sheldon Brown to free safety? Most people seem to agree that Sheldon has the makeup and playing style to be a very good safety and if he were named the next starter at free safety letting go of Dawkins suddenly makes a lot more sense.

If Springs does indeed sign, it will be interesting to see if the Brown to safety talk starts to heat up.