No Country for Old Eagles

Share All sharing options for: No Country for Old Eagles

Just five days into free agency and the start of the NFL offseason, the main complaint of Eagles fans seems to be that the team's plan for the offseason is unclear. In fact many are wondering whether there's a plan at all. 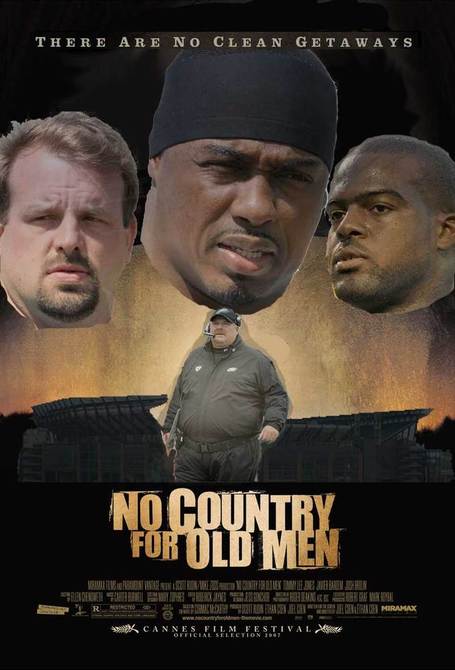 I must confess, I've wondered this myself.

Of course, like I said we're just 5 days into the NFL offseason. No one expected the Eagles to have their 2009 roster set by now, but I think most people felt that they'd see the makings of the Eagles' offseason plan. So far the team has seen a lot leave and not much come in... It seems like maybe that was the plan.

After the Eagles lost the NFC title game to Arizona, Eagles President Joe Banner in what seemed like an uncharacterstic moment of frustration said to Derrick Gunn,

"They say if you keep saying if you do the same thing over and over you’re kind of kidding yourself."

Of course, everyone jumped on that quote and assumed it meant Reid and McNabb were on the hotseat. Banner actually came out and clarified the quote to say he wasn't referring to those two. Some interpreted Banner to mean that the Eagles would go wild "Redskins style'" in the trade in the free agent market. Doesn't seem like that was right...

"Doing the same thing over and over" appears now to mean that it was time to move on from most of the remaining core of veterans that have been with this team for the past decade. Brian Dawkins is gone, Tra Thomas is on the verge of leaving, and the Eagles' big free agent signing is a guy who plays Jon Runyan's position... Those three guys have played a combined 33 seasons with this team. Both Dawkins and Thomas have been here every day of the Andy Reid era and Jon Runyan was  Reid's first big free agent signing. All three men are 35 years old.

The face of the Eagles is changing. These were pretty much the last men standing from the start of the Reid era. It's been 13 years since there's been an Eagles team without one of these guys on it. They were also among the few guys left from the team was just 3 points from winning the Super Bowl in 2004 and management has quite obviously decided that these guys have had their last shot to try and get us back. These three have been at the center of the winningest era in the history of the franchise. Under their watch, the Cowboys have only won one playoff game and that came in Dawkins' second year!

Now there's just one man left. One guy that's been here as long as Andy Reid. Donovan McNabb. He's now the elder stateseman on this roster. He, Brian Westbrook, Sheldon Brown, Greg Lewis, and David Akers are all that remains from the Super Bowl team. McNabb is 32, he's got 2 years let on his contract and it's pretty obvious he's hearing the footsteps. We've all followed the drama of the drafting of Kolb, the pleas for weapons, the benching, the secret meetings between McNabb and management, the "demand" for more job security in the form of a new contract... McNabb's the last guy in a war against time that all NFL players lose. He's all that's left of the core that has defined this team for the past decade and this year may be his last shot.

From here on out, this is going to be Stewart Bradley's team. Trent Cole's team. Desean Jackson's team. In a decade will any of these guys still be around? Is some Eagles blogger(or whatever they're doing in a decade) going to write a long post about the end of an era when Stewart Bradley or Desean Jackson leave?

As Eagles fans til the end, we'll be there to find out.

Thanks to andyreidswaistline and everyone else for the great photoshops. I have no doubt we'll be making use of them all in the coming weeks...