Share All sharing options for: With the 17th pick in the 2009 NFL draft the New York Jets select... 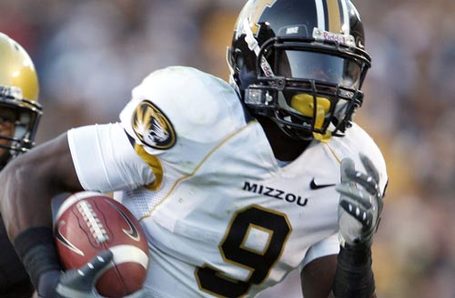 I was torn between QB,WR, and RB as the Jets biggest concern. While Freeman has the necessary cannon to excel in the AFC East, I don't think I can pass on Maclin falling down to the team. The Jets have 3 young qb's on their roster 26 or under. Brett Ratliff looked good enough in preseason last year that even if Freeman was selected, there is no guarantee that Freeman could have even beaten Ratliff/ Clemens out as starter this year. Most experts view Kellen Clemens and Ainge as serviceable backups, not starters in this league. With Coles leaving New York they need another playmaker on offense and that's exactly what Maclin will bring to the Jets. The Jets used free agency to build their defense, so without as many holes they are free to take the best player left on the board, and it just so happens that he fills a need as well. Most experts have Maclin as the second best WR in the draft behind only Crabtree, so to get that value in a draft where the WR position is strong, it's a great opportunity to grab a player they most thought would be off the board by now. As far as RB goes Thomas Jones will be 31 this year and most experts see Leon Washington as a change of pace back and extra weapon on the field, not a starting rb, so I am VERY tempted to take Knowshon Moreno as the rb of the future. Considering both Leon Washington and Thomas Jones are talking about contract extensions and even a possible holdout for Jones, it's very hard to pass on Moreno. Frankly if Jones causes much of a stink down the road my pick would definitely be Moreno, but since I am drafting right now and I believe that Ratliff has enough potential to see what he can do this year in a battle with Clemens for starter I am going to stick with one of the best offensive weapons in this draft. Maclin had good hands, great speed, and can do it all.

We are rolling! Keep those picks coming everyone. Commish take after the jump. Two Tons of Irony and Chicago Bears are on the clock.

Commish take - This is a great value pick. There's a good chance Maclin is a top 10 or 15 pick, so grabbing him at #17 is a steal. Plus, the Jets could certainly use a WR after letting Coles walk this offseason. Maclin and Jericho Cotchery along with an already good running attack will give whoever lines up at QB for the Jets a formidable array of weapons.