Share All sharing options for: With the 15th pick in the 2009 NFL draft the Houston Texans select... 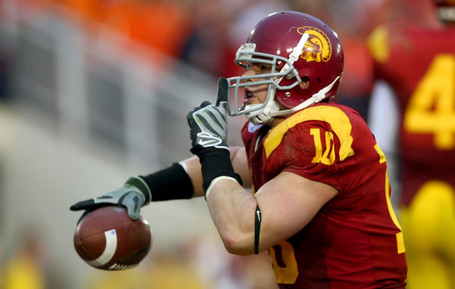 They are free to go get a playmaker and I see Brian Cushing as just that on the defense. A defense with Cushing and Mario Williams has the makings of becoming a very tough defense. He will bring some attitude to that defense. He is a blue collar, hard working, Line Backer with a deep intensity.

On talent alone, the USC product is just a notch below the more hyped Aaron Curry. Cushing has good size and strength, taking blockers very well on the second level and has the ability to shed them with ease. He closes hard on ball carriers at all points of the field, while maintaining containment. He is a very fluid athlete outside, with better football speed than the 4.68 he is listed for. Cushing possesses an unusual burst -- his best asset is his pass recognition ability. Seldom getting caught out of position, Cushing excels at covering backs and TEs. He is a ball hawk once the football is in the air, is very agile and fluid and has good sideline-to-sideline range.

However, he is not a polished pass rusher. Cushing lacks technique and is somewhat rigid and too intense sometimes. He tends to over-pursue. His productivity at USC was not what one would expect from a player of his immense talent.

One of the most talented players in this year's draft, Cushing is very versatile. Cushing can (and has) played defensive end, inside linebacker and even a little at safety. He is viewed as a strong side linebacker by most NFL scouts. A sure first rounder, he might possibly go as high as number 12th; it would not surprise many if Cushing turns out to be the best LB (inside or outside) of this draft. He is a playmaker with tremendous upside.

Commish take after the jump. USMCSLB and the San Diego Chargers are on the clock.

Commish take - The Texans would be building quite the young defense with this pick... They've went defense with their top pick more often than not but those picks haven't exactly started paying dividends just yet. The Texans were still near the bottom of the league in points allowed. A poll of Texans fans showed that they're looking to get a linebacker out of this draft, although in that poll they clearly prefer a different USC LB.... That said, this is not the first mock draft to have Cushing going to the Texans. Seems like a solid pick.