Share All sharing options for: With the 14th pick in the 2009 NFL draft the New Orleans Saints select... 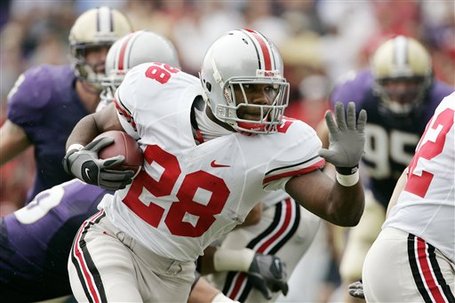 It's been over 2 days since our last pick which is way past the deadline, so I've made the Saints pick myself. We definitely need to speed this thing up!

The Saints have spent most of the offseason addresing their considerable defensive needs, however at this point in the draft I think they look to offense. After cutting long time back Deuce McCallister this offseason, the Saints could grab Beanie Wells here and slot him perfectly into the role that McCallister played so effectively when he was healthy. Wells, who is probably the best back in the draft as far as flat out running the ball can handle the majority of the carries in NO and free up Reggie Bush to move around the offensive formation.

Outstanding size and bulk...Very athletic...Strong, powerful downhill runner...Breaks a lot of tackles and doesn't go down easily...Excellent stiff-arm...Explosive with a burst...Patient with very good vision and instincts...Has nifty feet...Moves well in the hole...Good balance and usually falls forward...Can stick his foot in the ground and change directions...Reaches top speed in a hurry...Plays faster than he times and was able to run away from people in college...Workhorse who gets stronger as the game goes on...Real competitive...Terrific production.

The Houston Texans and LEKsensei are on the clock