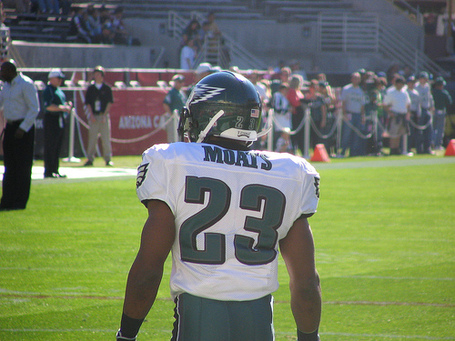 This story was first broke in the fanposts, but I thought it deserved another mention. Former Eagle and current Texan Ryan Moats is in the news after he was the victim of some very disturbing police misconduct that was caught on film.

The Dallas Morning News has the story

As he rushed his family to the hospital, 26-year-old NFL running back Ryan Moats rolled through a red light. A Dallas police officer pulled their SUV over outside the emergency room.

Moats and his wife explained that her mother was dying inside the hospital.

"You really want to go through this right now?" Moats pleaded. "My mother-in-law is dying. Right now!"

Officer Robert Powell, 25, was unmoved. He spent long minutes writing Moats a ticket and threatened him with arrest.

"I can screw you over," the officer said. "I'd rather not do that."

The scene last week, captured by a dashboard video camera, prompted apologies and the promise of an investigation from Dallas police officials Wednesday.

"There were some things that were said that were disturbing, to say the least," said Lt. Andy Harvey, a police spokesman.

Moats and his wife, who were pulled over as they pulled into a space in front of the emergency room pleaded for the officer to listen to them, but he refused despite hospital staffers and even another local cop confirming Moats' story.

His mother in law passed away while the officer forced Moats to remain in his car as he checked for outstanding warrants...

The story is definitely worth a read and it really makes your heart go out to Moats. The experience sounds like an absolute nightmare.