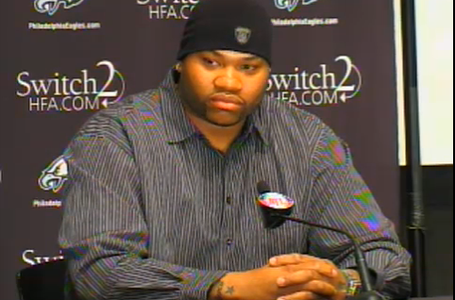 Bengals coach Marvin Lewis, speaking to a Philly reporter at a media breakfast, made it pretty clear that Stacey Andrews' signing in Philadelphia came as a surprise to him.

Asked if he was disappointed about losing Andrews, Lewis admitted that he was, saying he felt he had been misled by the older brother of Shawn Andrews, the Eagles' two-time Pro Bowl guard.

"He's a guy who has worked hard to come back from this knee injury, and I would imagine he'd be ready to go when this season opens up," Lewis said. "That was the indication when he was in our building."

Andrews was the Eagles very first signing this free agent period and Leonard Weaver has been their most recent. Weaver recently spoke to Seattle area media and clearly sounds as if wished something could have gotten done there and that the Eagles were his secondary choice.

"I’ve connected with so many people on a personal level," Weaver said. "And it’s just been a hard deal knowing that I want to be here and I made that clear to the organization a number of times, and here it is we still can’t get nothing done.

"And now it resorts to this where I have to make a secondary choice, which I did. So it makes it very tough. Guys like (Lorin) Big Lo (Sandretzky0 and Hawk Fiend, guys who I’ve met on a personal level and who are really passionate about the Seahawks, it’s been tough being able to look at those guys and leave.’

It's a pretty long interview and very heartfelt from Weaver. You could tell he had a strong connection with the team and it's fine, which is something I admire. I certainly hope he can develop that kind of relationship here.