Share All sharing options for: With the 11th pick in the 2009 NFL Draft the Buffalo Bills select... 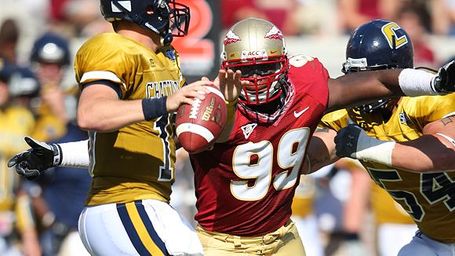 * OL : With Peters holding out, and some talented skill players
already on the roster (Edwards, Owens, Evans, Lynch/F.Jackson
combo, James Hardy, Reed), the Bills might want to improve their
blocking up front. This would give Lynch and F.Jackson more
running options, and give more time to Edwards. We all know that
if their pass protection doesn't improve, Edwards won't have
enough time to throw some deep balls to Owens, who will start to
complain on the sidelines. And the Bills don't need that. But
Monroe, J.Smith and A.Smith are gone, and I don't think *Oher* is
worth such a high pick.
* TE : Robert Royal was their 2008 starter... That says it all.
Trent Edwards would sure like another weapon, especially one that
can also be a good blocker...*B.Pettigrew*. But is he worth a pick
that high ? I don't think so. (Plus, Owens might ask a trade if
they pick a pass catcher in the first round)
* The Bills defense was ranked 24th in Pass defense last year. And
their defensive line was ranked 28th in Adjusted Sack Rate (
Basically, percentage of passing plays that ended in a sack from a
BUF defensive player : See http://footballoutsiders.com/stats/dl
for more details).


So their biggest need is clear : They need to add a pass rusher to play opposite Aaron Schobel , who is good when healthy (Played only 5 games last year).

I don't think *T.Jackson* would be a good choice, because even though he has lots of upside, his pass rushing skills seem limited. And he seems most suited to the 3-4.

Even though *Aaron Maybin *seem to have great instincts, a good first step and very good technique(20 TFLs and 12 sacks), I'm a little bit worried by his lack of bulk right now(Evn though he was up to 252 pounds at his Pro Day, I'm still not sold on the fact that he can play at this weight).

So my pick is : *Everette Brown, DE, FSU

Commish take plus more analysis after the jump. Andyb and the Denver Broncos are on the clock.

A little more info from bubqr on Everette Brown

Strengths:
Excellent athleticism...Great speed and quickness...Explosive with a burst...Possesses a terrific first step...Agile with good change of direction and balance...Has big hands and uses them well...Has a varied repertoire of pass rush moves...Can be effective off the edge or inside...Good strength...Has a great motor...Does a nice job in pursuit and closes in a hurry...Offers some positional versatility...Strong work ethic...A team leader...Very productive...Still has considerable upside.
Weaknesses:
Does not have the ideal height or bulk that you look for...Might have to make a position change at the next level...Does not hold up well against the run...Pretty raw and wasn't used much in coverage...A little inconsistent...Frame is close to being maxed out...Marginal instincts and awareness...Poor program pedigree...Limited starting experience.
Notes:
Could be either a 4-3 defensive end or a 3-4 outside linebacker in the pros...Redshirted in 2005...Saw extensive action as a backup early in his career but did not emerge as a full-time starter until his junior year...Garnered a number of 2nd Team All-American honors in '08...Named 1st Team All-ACC and finished as the runner-up for ACC Player of the Year and Defensive Player of the Year after leading the conference in sacks and tackles for a loss in '08...Finished the 2008 season third in the nation in sacks and was the only player to rank in the top four in both sacks and tackles for loss...His 46.5 career tackles for a loss rank second in Florida St. history...Will have to battle the stigma that is associated with Seminole defensive ends because guys like Jamal Reynolds, Alonzo Jackson and Kamerion Wimbley have not fared well in recent years...One of the top pass rushers in the '09 Draft.

Commish take -To be honest I watched very little of the Bills last year and I didn't know much about their needs. Bubqr's stats about their sack rate certainly makes a convincing argument that the pick of a pass rusher is the right way to go. I checked over at our bro blog Buffalo Rumblings and it turns out they're very big on Brown saying

"We love Brown. We'd be thrilled to land Brown"

So it seems like this pick was spot on.