Share All sharing options for: With the 10th pick in the 2009 NFL Draft the San Francisco 49ers select... 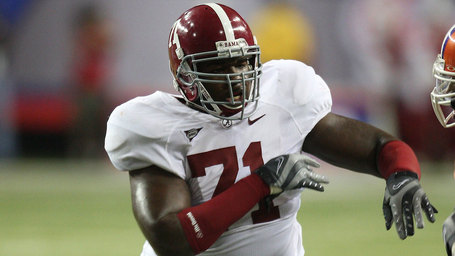 When I unexpectedly became the 49ers General Manager last week the first thing I realized was that my team led the NFL in sacks-allowed in 2008 with a horrid 55. We have a major hole at RT with Jonas Jennings being told by new Head Coach Mike Singletary that he will not return. I'm comfortable with the immediate future of all the other spots on the line: Staley is already a good young LT, Baas and Rachal are promising young Gs and Heitmann is fine at C. RT, however, is worrisome.

Now I'm going to get some flak for deciding to draft the mercurial Andre Smith - he of the Sugar Bowl suspension (and Alabama lost that game by the way...) and the bombed-out pro day. There are certainly some question marks around this guy, especially his character and work ethic. But who better to deal with his antics than hard-nosed Mike Singletary? One mooning from him and Andre will know who's boss. But in all seriousness, I believe that Singletary has earned the respect of his locker room and is going to take a hard line with Andre - and that is exactly what the young man needs. Furthermore, I think that as a self-described "old school" coach he prides himself on taking challenging prospects and molding them into solid players (this is what he is trying to do with Vernon Davis and it might be working). This also works on a self-interested level; as a new head coach, Singletary wants to show he has what it takes to succeed and there's no better demonstrative project in this draft than Andre Smith. The team is already rumored to be interested and impressed with Smith.

Now, this is all moot if Smith wasn't worthy of the #10 pick. But no one can deny his ability - his absolute dominance at the collegiate level (in the mighty SEC no less) is right there on film. While this selection happens to fulfill a 'need' - Smith is also the most talented offensive lineman in the draft. Furthermore, he seems to fit the bill as a physical, mauler type of tackle that Singletary is looking for. Some scouts are worried about Smith's quickness as a tackle, and while he could use work there he was a dominating run blocker. And when you have Frank Gore that's important. What about Michael Oher, you might say? He is another good tackle prospect without nearly the same character issues surrounding Smith. This is true, but the problem is that I can't find too many scouts who grade Oher as a better prospect. Many don't even put him in the same category. Finally, would Smith be available later in the first round? Could be. There are no trades in this mock draft but if the 49ers really like Smith and believe he'll be available later then they could certainly trade down and still get him. However, I think other teams are also willing to take a risk on Smith so it's not clear how far they should/could trade down.

In reality someone like Sanchez or maybe even Stafford might be available here. But I believe the 49ers have two good young QBs on the roster. Look at Shaun Hill's numbers from last year. He's a talented player who was playing behind a bad, aged offensive line (he was sacked 23 times in only 9 starts). Also, I'm not ready to give up on Alex Smith yet either, the 2005 1st overall pick. Smith is still only 24 years old and just re-signed with the team. He was baptized by fire his first year in the league and suffered through four different QB coaches in four years, a recipe for failure. Singletary feels he'll have a good competition for the starting spot in camp between these two. He did try to acquire Kurt Warner in free agency - this is true and might speak to his interest in drafting a QB - but there's no guarantee there's another instant (or long-term) Kurt Warner in this year's weak QB class.

In the larger picture, the 49ers play in (arguably) the weakest division in the NFL. They finished 7-9 while the Arizona Cardinals, the NFC Super Bowl representative, went 9-7. This should be cause for optimism. They went 3-3 within the division and 5-3 under Singletary. This is not a team in rebuilding mode; the time to win is now and the opportunity is there. Smith can start right away at RT (he's out of shape now admittedly but we've got some camps to go) and bolster the offensive line.

Other picks: I was also tempted by adding another pass rusher but I believe this hole can be addressed with a later selection. The defensive line is not nearly as large a problem as the offensive line. Also, WR was a possibility here with Maclin's availability but we have several young WRs (Josh Morgan and Jason Hill) with promise and we also added Brandon Jones from the Titans as a free agent. Furthermore, there should be some good WRs available in the 2nd round for the plucking. Finally, we need to draft another safety but there's no one, in my estimation, worth taking at this spot.

Andre Smith is simply the best pick and fills a glaring need. The risk is there, but the upside is enormous.

Signed with Alabama as the top prep offensive lineman in the country and proved well worth the hype. Smith started every game of his career except the January 2009 Sugar Bowl (suspension), and developed into an elite pro prospect. A massive presence with rare athleticism, Smith was arguably the most valuable player in Alabama's rise this season, and his absence was obvious in the Tide's loss to Utah in the Sugar Bowl. After becoming only the seventh true freshman in school history to start the opening game of his career, Smith quickly developed into a star, voted as a true sophomore as the co-recipient (along with Arkansas center Jonathan Luigs) of the 2008 Jacobs Blocking Trophy, presented annually by the SEC coaches to the best blocker in the conference. A consensus All-American voted the Outland Trophy winner, Smith had a spectacular junior campaign until being suspended for the Tide's Sugar Bowl date with Utah for improper dealings with a sports agent. While scouts are sure to question Smith's priorities, his play is without question. A dominant run blocker and surprisingly agile pass protector, Smith is among the elite talents in the draft and a likely top-five selection. Had an arm span of 35 3/8 inches and a hand span of 9 3/4 inches at the combine.

Commish take after the jump. Bubqr and the Buffalo Bills are on the clock.

Commish take - Much has been made of Smith's terrible pre draft period, but before the combine and before his pro day this guy was being discussed as a possible #1 overall pick. While his stock has fallen, I can't believe that this poor pre draft period he's had is going to drop him into the 20s as some mocks have suggested. Some team is going to look at his tape and see an absolutely dominant OT and tell themselves that they can work through his off the field issues. I think Ajay is right in suggesting that Mike Singletary might be the right guy to do that. This is a big need for the 49ers and if Smith is as good in the NFL as he was college, he'll be a steal at #10.