With the 8th pick in the 2009 NFL Draft the Jacksonville Jaguars select...

Share All sharing options for: With the 8th pick in the 2009 NFL Draft the Jacksonville Jaguars select... 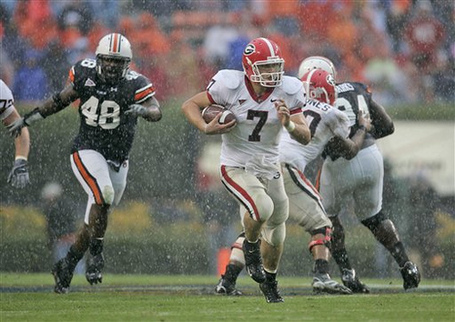 NPK's full explanation is after the jump. LeonSA and the Green Bay Packers are on the clock.

What The Hell ?!?!? Didn't the Jags just sign Garrard Through 2014 last season ?!?! Why yes they did, but I have selected Stafford for many reasons. I need not worry because there are sports analyst who share the same thought of Drafting Matty Boy if he is still around at 8. I repeat don't be surprised if the Jags snag Matt if hes around. This is almost a gift from God that Matthew dropped to 8. The Jacksonville Jaguars needed to address other positions in the draft such as OT/WR/CB but I have selected Matt for many reasons. Simply put, you just do not pay any guy in the first round top 10 money. As easy as it would of been to select one of the more pressing needs you have to keep in mind finances, look at the difference.

Garrard is 31 years old. Its time to start thinking about the future and with a QB of Matthews caliber you just cant pass him up. I would of taken Sanchez if Matt wasn't available as well. Ideally Matt would learn the system for a few years and then compete or depending upon the amount of confidence Jack Del Rio has in him could be competing right away. Jack Del Rio for those of you who dont know, did not see promise from Garrard when he took over as HC.

Garrard was drafted as the apparent successor to starting quarterback Mark Brunell. However, following the 2002 season, the Jaguars fired then head coach Tom Coughlin, and new head coach Jack Del Rio drafted Byron Leftwich with the seventh overall pick in the 2003 NFL Draft. Leftwich replaced an injured Mark Brunell as the starting quarterback during the 2003 season and Garrard continued to serve as the team's backup quarterback.

Who knows if we could see a repeat of 2003 or if Jack's confidence has finally simmered with Garrad. Just incase Jacks faith boils over Matt is definitely the guy this year to make the biggest impact if given the chance. David Garrard had a mediocre season last year, but being the most sacked QB in the league sounds like an O-line issue. Eugene Monroe and Jason Smith have already been taken and Andre smith does not tempt me enough to take at number 8.

The Angry "No Trades Allowed" Baby

Now i know JasonB has not allowed trades but lets entertain the idea that not only does this give the Jags flexibility at QB or future security at QB but it gives them the option to trade down if they haven't already done so by this point and time. Drafting Matt to ship around leaves room to gain a pick or two and be comfortable stepping back and maybe taking an Andre Smith or Malcom Jenkins. With the departure of Matt Jones, WR Jacksonville Jaguars 6'6 -218 lbs and Jerry Porter WR Jacksonville Jaguars 6'2 - 220 lbs, The Jacksonville Jaguars are left with a unimpressive wide receiving corps IMO which have a mixture of age. This leaves the Jags without a big WR threat, but they can easily drop back and pick up Kenny Britt without a doubt.

Now that I have given you my reasons lets learn more about Matt Stafford the number 8 overall selection in our draft.

Jacksonville Jags QB Coach Mike Shula was very impressed how Stafford Shows Off His Arm at a Georgia Pro Day.

"I think he's got a bright mind," Shula said. "I think he's a fast thinker and I think he has all the tools that an NFL quarterback is going to need to be successful."

Shula said Stafford's draft status should not be hurt by not throwing at the NFL combine.

"I think, especially with a guy who supposedly has a chance to be a very, very high pick, it's understandable," Shula said. "I think maybe guys down the line need that. We respect all that. Do we want everyone to work out at the combine? Yeah. We respect that, especially with someone who is in the position he's in."

Blessed with a stronger and more accurate arm than many current NFL quarterbacks, Stafford possesses the type of upside that has in the past guaranteed a high first-round selection. Considered by many to be the top prep quarterback in the country when he signed with Georgia, Stafford led Highland Park High School to their first state title since 1957 and in the process earned the EA National Player of the Year. Despite less than impressive statistics (1,749 passing yards, 7-13 TD-to-INT ratio), Stafford earned All-SEC Freshman accolades in going 6-2 as a true freshman starter, earning victories against the likes of then-No. 5 Auburn, No. 14 Georgia Tech and rallying Georgia from a 21-3 deficit in the Chick-Fil-A Bowl to earn MVP honors in the victory over No. 16-ranked Virginia Tech. Significant statistical improvement as a sophomore (2,523 yards, 19-10 TD-INT) and another bowl game victory (over Hawaii in the Sugar Bowl), along with the emergence of superstar running back Knowshon Moreno, led to huge expectations for 2008. Stafford and the Bulldogs were unable to fulfill the expectations of their preseason No. 1 ranking, but his record-breaking junior campaign (3,459 yards, 25 TD-10 INT) and third bowl victory (Michigan State, Capital One Bowl) underlined his talent. Scouts have concerns about Stafford trusting his arm with risky throws, but considering his marked improvement in a pro-style offense, durability and production again SEC competition, Stafford ranks among the elite talent in the 2009 draft. Had an arm span of 33 1/4 inches and a hand span of 10 inches at the combine.

I hear nothing but good things about Stafford and quite frankly any QB who wants to play for the Detroit Lions after an 0-16 season shows nothing but good character and unselfish concerns for where his NFL career may carry him.

Quarterback Matthew Stafford is welcoming the prospect of being selected by the Lions with the No. 1 overall pick in April's draft with open arms -- literally.

"I'm being completely honest, and it has nothing to do with money -- I would love to go to Detroit," Stafford told King, echoing comments he made in a 15-minute news conference earlier Friday at the combine. "My friends say, 'C'mon, gimme a break.' But I'm a competitive guy. The Lions have passionate fans, a great stadium, and I'd be throwing to the biggest freak (Calvin Johnson), with the most talent, of any receiver in the NFL."

The Lions' top brass, including head coach Jim Schwartz, had a two-hour dinner with Stafford on Thursday night in Indianapolis. By all accounts, it went well. Well enough, in fact, that Stafford felt comfortable enough the next day to sneak up behind Lions president Tom Lewand and give him a bear hug, King reports.

Ive even heard the guy compared to Brett Farve, even though he was being compared and critiqued as a fault for sometimes throwing long passes he shouldn't throw up it doesn't phase me. Overall his accuracy is worshiped by most scouts, and being compared to Brett Farve in any aspect is never a bad thing. To end on a lighter note Matt Stafford is a fan of the girls and guys so hes a perfect poster boy for both genders of a fan base. The guy just likes to have a good time. 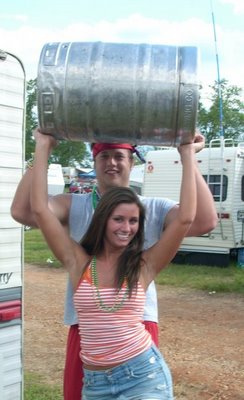 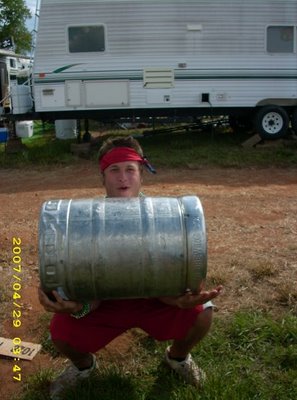 Commish take - My first reaction was surprised. A QB? But NFK is right, he's not the only person thinking QB here. Almost half of the mocks I see around the web have the Jags taking a QB. Not only could they use an upgrade over Garrard, but they really have no depth at the position. There's several other positions the Jags could go here including CB, OT, or WR(would have been my pick)... but it certainly does seem that QB is a possibility. I think if Matt Stafford were to drop to #8 they absolutely might grab him or trade the pick to someone who will.