With the 7th pick in the 2009 NFL Draft the Oakland Raiders select...

Share All sharing options for: With the 7th pick in the 2009 NFL Draft the Oakland Raiders select... 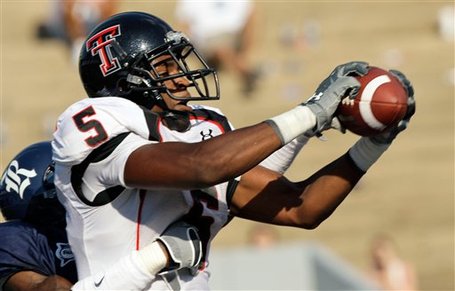 Okay, let's see... with their last two first round picks the Raiders put Black & Silver on a strong-armed QB and a play-making RB. Al's obviously building the offensive nucleus of the future. Maybe he's not as crazy as everyone thinks after all. That said, if he's available @ seventh the Raiders will definitely take WR Michael Crabtree.

Even with the recent surgery and not being able to run for the scouts he so dominated opponents over his 2 seasons at Texas Tech there's no doubt Al goes for the play-maker. For once I think I agree with him. Sure, they could use help on the O-line, but Davis' never been shy about bringing in tried and true talent (aka the over-the-hill gang) to fill spots as needed and even pays them (often far too much).

Crabtree's downside? Well, he's a bit smaller than advertised and doesn't seem to have blazing fast top-end speed. Al's usually a sucker for 40 times but the sure hands and big-play ability make Mike the consensus #1 receiver in the draft. Al's a sucker for the #1 anything. Besides, who's he gonna go for instead - Heyward-Bey? (who, hopefully, will be there for the Iggles later in the round - he'd make a great bookend for DJax)

The upside? You've seen the highlights, he's got natural talent and pure athleticism. He goes and gets the ball in traffic - which is a huge plus for JaMarcus who's usually not nearly as precise as he should be. Just look at the numbers Crabtree put up over his two seasons - 97 receptions for 1100+ yds and 19 TD this year. His freshman year was even more productive because the defenses weren't ready for him. Michael is ready for prime-time and folks in the Raider Nation are ready for him to wear the Black & Silver.

Commish take after the jump. NorthPhillyKidd and the Jacksonville Jaguars are on the clock.

Commish take - Regardless of whether this is the right pick or not... Can anyone deny that it will be the pick if he's there? That said, it's not as if the Raiders don't need a WR. Their most productive WR last year had 22 catches. He led the team in catches by a wideout with 22! So yeah, they could use some help there. My one caveat is whether Al Davis gets enamored with the speedster Maclin and suprises everyone by taking him over Crabtree?