With the 6th pick in the 2009 NFL draft the Cincinnati Bengals select...

Share All sharing options for: With the 6th pick in the 2009 NFL draft the Cincinnati Bengals select... 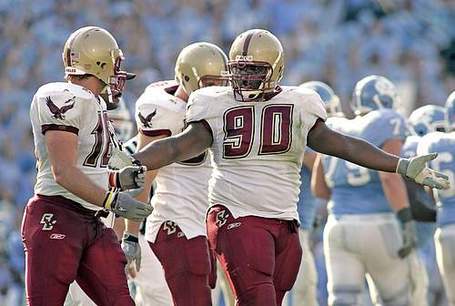 At the number six spot, you really need to draft a sure thing. I can only identify two sure-things left in the entire draft: Michael Crabtree and B.J. Raji.

Crabtree would have been an interesting addition. Chad Ocho Cinco has maybe two good years left. Laveranues Coles might not even have that much. The jury is still out on Chris Henry. And all that's left is last years 2nd-round and 3rd-round draft picks, Jerome Simpson and Andre Caldwell. Michael Crabtree, only 21 years old, would benefit from having a season or two to adjust to the NFL and Bob Bratowski's playbook, and have quite a few excellent players ahead of him to learn from. Envisioning a Bengals line-up two years from new boasting Crabtree and Simpson is very enticing and could compete as one of the best 1-2 tandems in the league.

But ultimately it comes down to two simple truths:

- Defense rules the AFC North. In a division dominated by the Pittsburgh Steelers and Baltimore Ravens (3 NFL titles and 17 playoff wins in the last 9 seasons), defense defines the haves and have-nots.

The Bengals have some very strong pieces in place on defense: two book-end defensive ends, a solid line-backing corps with a returning Keith Rivers, a solid secondary featuring two former 1st round picks. They just haven't come together as a force. A critical ingredient was missing: that intangible (and often unheralded) player who can consume blockers at the line of scrimmage to free up the pass rushers and allow the linebackers to zero-in and attack the ball carrier, thereby releasing the secondary to better roam and defend down field. Essentially the player who will enable Marvin Lewis to deploy his signature dominating style of defense.

B.J. Raji has the athleticism, speed, and strength to immediately anchor the Bengals defense in a comparable manner to how Albert Haynesworth defined the Titans defense the last three years, and how both Haloti Ngata and Tony Siragusa, before him, anchored the Ravens. In college, B.J. Raji absolutely dominated the defensive line tallying 8 sacks and 16 tackles for loss. At the Senior Bowl, he was unstoppable and had to face double-teams the entire game.

It would have been nice to draft the next Willie Anderson, but Jason Smith and Eugene Monroe went #1 and #2. Michael Oher is more of a middle-of-the-1st-round prospect; the best of what I'll call a deep 2nd-tier of offensive tackles. Andre Smith is way too much of a risk at this pick. And even though tackle was the biggest weakness last season with Levi Jones (who may not be on the roster much longer) and Stacy Andrews (who gave up 9.5 sacks in 2008), this draft is actually deep enough at OT that good ones can be found when the Benglas pick again the early 2nd and 3rd rounds.

A difference-maker is rare and hard to find, and where the Bengals are drafting, only two guaranteed difference-makers were available, and one of them would have had to wait in line.

The Benglas welcome B.J. Raji. Hell, his name even sounds like a Bengal.

Commish take after the jump. 21510akland and the Oakland Raiders are on the clock.

Commish take - When you have to face the Ravens and Steelers four times a year you better be able to stop the run. Last year the Bengals ranked in the bottom half of the league in that category and picking a big two gap playmaker like Raji to man the middle of that defense will help. I like the pick. The Bengals are in real need of an OT, but Raji is a better value than any OT left.