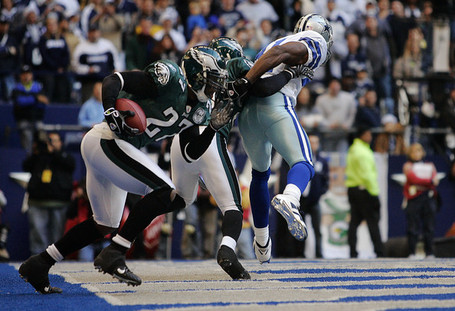 Good morning, BGN.  It’s Monday, March 2, 2009 and Brian Dawkins is no longer a Philadelphia Eagle; but the sun still rose.  So far, in this fledgling off season, Dawkins’ departure has been the hot story surrounding this franchise.  Most of, if not all of, the Eagles’ fanbase had an emotional attachment to the man that patrolled our secondary for 13 years.  Currently, emotions are ranging from anger, to disgust, to hope; and I think it’s key for us to focus on that last one.

I did some analysis yesterday in an attempt to get a feel for what we should expect from the defense sans Brian Dawkins, but before we get into the statistics, let’s get a few things out of the way.  This, by no means, is meant as an attack or an anger-driven outlash due to the circumstances.  I’m going to be as objective as I can; although I may add some opinion at the end.  I have nothing but respect and gratitude for everything that #20 did for this team for the better part of a decade and a half, and I wish him and his family well with their future endeavors.  Now that that’s out of the way; onto the meat and potatoes.

I began to ask myself how to go about figuring this out, and honestly couldn’t come up with anything valid.  Right now, we’re not even sure who the starters will be and who will be in depth.  Looking at Dawkins’ career numbers, something stuck out as useful, and the time frames of these occurrences are very helpful as well.  You’ll see why in a second.  Instead of trying to predict what will happen in the future, it may be easier to analyze what has happened in the past to guide us.  We were very fortune that Brian Dawkins only had two significant periods of time missed due to injury; nine games in 2003 and five games in 2007.  So, let’s examine what happened on a per game basis with Dawkins versus without him.  The timing of these two seasons is excellent as well.  Many of us have conceded the fact that he is simply not the same player as he was five years ago.  If this is accurate, I would expect greater deviation in the 2003 numbers.  Let’s have a look.

These were some decent categories that I could justify using to compare per game performance; italicized numbers in the “Difference” row represent shortfall.  Additionally, in all columns besides the “Turnover” columns, a positive number in the “Difference” row represents decreased production.  So let’s take a quick peak at 2003, when Brian Dawkins was in the prime of his career.  When we lost him, we gave up a little less than a field goal per game more (which is a significant increase), fifteen more yards passing per game, and about five more total yards per game.  We actually gave up ten yards less rushing and averaged a little more than a third of a turnover per game more; third down conversions were almost the same.  This data seems to fit.  We were more vulnerable to the pass without his coverage skills, but to compensate, we sold out a bit more against the run.  We seemed to miss Dawkins a lot more in the redzone; probably in both coverage and blitzing.

Now, let’s look at 2007.  Without Brian Dawkins, we actually gave up over four less points per game (that’s pretty significant), gave up about two less yards rushing per game, and were about 4% more stout on third down.  We only gave up two more yards passing and forced a third less turnover per game.  Total yards, however, were basically a wash.  So what does this tell us?  Well, in reality, it’s saying that with or without him, we actually had almost identical production out of our defense.  Maybe our coverage improved in the redzone a bit and we gave up less points as well.

It’s difficult to compare the 2003 numbers to the 2007 numbers because there are so many differences in personnel and such between the two squads.  However, it is much easier to make a generalization and say that his loss in 2003 was far more significant than in 2007.

Now, for a bit of opinion.  What will we loose, what will we gain, and what can we expect?  We all know that two major things that we will loose are Brian Dawkins’ leadership and his experience.  At this point, we need to face facts and acknowledge that we are loosing the production of the current Brian Dawkins; not the 2003 version.  I think we can replace that production, but as I said, we will miss his leadership and experience.  The thing I think we’ll miss the most at first is his blitzing abilities.  I know that someone on that unit will step up as far as leadership goes, and I’m personally pulling for Sheldon Brown.  Now, what will we gain?  No matter who the starter is, we will immediately gain youth, speed, and coverage skills.  For those of you that may be worried about the physical presence and hitting, if it is Demps, he’s the same size as Dawkins, and if you watch his tape, he can bring the wood.  What should we expect?  To be honest, I think we should expect almost the same exact defense as we saw late this year; maybe a little tighter coverage.

As I said, I love Brian Dawkins and respect everything he has brought and has done for the Eagles, but we all knew this day would come eventually.  Our front office has routinely shown excellent judgment in the past in similar circumstances.  I have to believe that this trend will continue.  Let’s all show respect and thanks to #20 in whatever way each of us sees fit, but let’s also not forget that the team is larger than one player.  If there’s one person whose loss would affect us the most on defense, it’s Jim Johnson.  I have confidence that he has a plan.  I, for one, am excited to see the infusion of new blood into this already young and talented defense!  I know training camp and opening day will be a little strange, but these things happen, my friends.