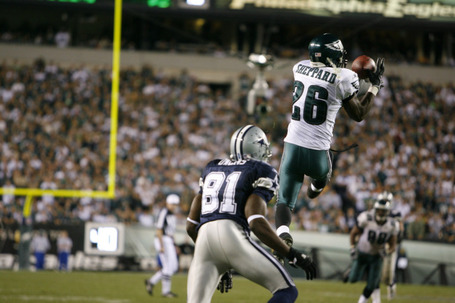 Lito Sheppard was traded to the Jets over the weekend in a deal that netted the Eagles a 5th round pick this year and a conditional pick next year. The conditional pick could be anything from a 4th to a 2nd rounder. Lito also got a new contract as part of the deal... Now we've finally got details on that contract and how it affects the Eagles.

Pretty surprising how far this guy's stock has fallen.

• Technically, there's no guaranteed money in the contract. Sheppard will make $3 million this season, the same he would've made with the Eagles.

• If Sheppard is injured and misses considerable time, the Jets can get out of the deal after one year and they wouldn't owe the Eagles a draft pick in 2010. If that's the case, all it would've cost them is a fifth-round pick in the '09 draft. One person familiar with the deal said it could amount to a "one-year test drive" for the Jets.

• The conditional pick in '10 can rise to a second-rounder, but only if he hits an 85% playing-time plateau AND receives the four-year extension. And if that does happen, the Jets would get a fifth-rounder back from the Eagles.

• If Sheppard makes 85%, but doesn't receive the extension, the Jets would owe a third-rounder to the Eagles and would recoup a fifth rounder.

Not as good a deal for the Eagles as it first sounded. It certainly could be good, but watching Lito these past 2 years I can't say that I'm confident in ever seeing that second rounder. On the other hand, Lito is basically playing for a big contract this year and hopefully that's motivation enough for him to stay on the field and play like he was 3 or 4 years ago.