With the 5th pick in the 2009 NFL draft the Cleveland Browns select...

Share All sharing options for: With the 5th pick in the 2009 NFL draft the Cleveland Browns select... 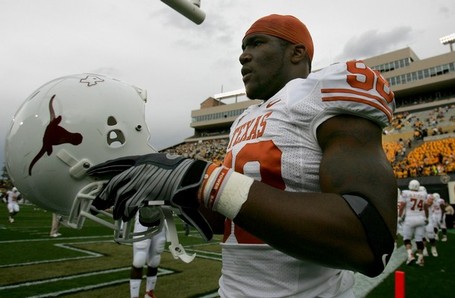 Orakpo, 6'3" 265lbs, is regarded as the best pass rushing end in the draft, and will fit nicely as the rushing end in the Browns 3/4 scheme. I will admit, Crabtree is tempting here, especially on top of the news that Stallworth's career is over (not that he contributed that much anyway), but Orakpo should have an immediate impact on a defense that finished tied for 2nd to last with 17 sacks.

As a senior in 2008, he racked up the accolades. He was the Big 12 Defensive Player of the Year, won the Bronko Nagurski Trophy, the Ted Hendricks Award, the Lombardi Award and was an AP Consensus 1st team All-American.

Regarding his injury history, Orakpo was thoroughly examined by team doctor Richard Figler, who stated there were no concerns. Following the physical, Orakpo was put on antibiotics as a precautionary measure, a routine practice for players who are examined in the Brown's facility.

Commish take after the jump. Luxury Used Vehicle By Braman and the Cincinatti Bengals are on the clock.

Commish take - Seems like a slam dunk pick to me. The Browns couldn't pressure the passer last year(second fewest sacks in the NFL last year) and Orakpo would be the perfect fit to rush the passer as an OLB in their 3-4 system.