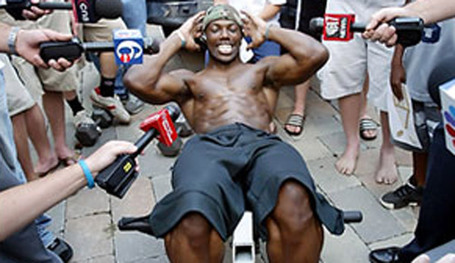 You can workout in this very driveway!

I'm sure we're all shedding massive amounts of tears for these two... but it appears Jevon Kearse and Terrell Owens have still not sold their Philly area residences.

In 2005, receiver Terrell Owens put 40 Landing Court on the market for even more than the Peetes' place: $4.4 million.

T.O. has since done a stint with the Dallas Cowboys and shuffled off to the Buffalo Bills.

His Jersey house remains for sale, however, the asking price down to $2.65 million.

Over a year ago, defensive end Jevon Kearse put his crib up for sale as well, asking $3.1 million.

At least "The Freak" is still asking more than the $1.8 million he paid. Not T.O. He originally forked over $3.4 million, according to reports.

So if you've got an extra 3 or 4 million and want to live in Moorestown... give TO or the Phreak a call!