With the first pick in the 2009 NFL draft the Detroit Lions select...

Share All sharing options for: With the first pick in the 2009 NFL draft the Detroit Lions select... 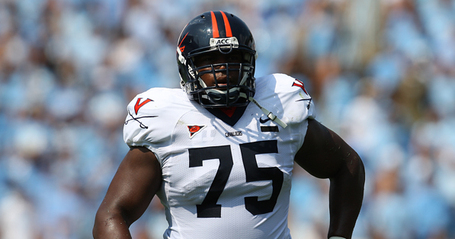 I know Matthew Stafford is the sexy pick here but I think the Lions have more pressing issues that can’t be solved by a QB. I’m not convinced that Stafford can step right in and be successful in the NFL. Matt Ryan and Joe Flacco had 1 thing in common last year … a running game (number 2 and 4 in the league respectively). The Lions last year were 30th in the league. Stafford was successful in college but look at who he had in his backfield, Knowshon Moreno arguably the best RB in the draft. Kevin Smith is a good young RB who did play well last year all things considered. I don’t think Kevin Smith on his own can take the pressure off of a rookie QB.

Jeff Backus is the current LT for the Lions and is a solid player but I believe he will be moved into the LG spot and Monroe will be the new starting LT. Backus is getting a little older he’ll be 32 this year and got beat up for 9.25 sacks last year, good for 4th worst among LTs last year. They can use his skill and mentoring while hiding him in the Guard spot. This will give them young book ends with Gosder Cherilus (24) at RT.

Monroe has long arms, huge hands, and is quick (for a big guy) he had the opportunity to practice against Chris Long in college which is an obvious advantage. He also played alongside Brandon Albert during his career at Virginia. This may have helped him look better than he actually is, but he continued his high level of play once Albert left, as he received the 2008 Jacobs Blocking Trophy. Also, consider that Albert was one of the most sought after OTs in the draft last year yet Monroe was good enough for Virginia to keep Albert in at Guard, now that says something.

I considered Jason Smith here but he is a TE convert that is still a little raw and I think will need some work at the pro level to perfect his technique where Monroe can step in tomorrow. I also considered DT specifically B.J. Raji, considering the Lions gave up 404 yards a game last year 172 of that on the ground and they just traded Redding, but I couldn't do it. With the addition of Peterson and Henry they have improved there defense and can take a DT later in the draft.

The Lions need help on both lines before anything else, there is no use in drafting a young QB if he is going to get beat up and demoralized. They have a great target in Calvin Johnson, who can catch anything thrown his direction, let’s give someone the opportunity to stay upright long enough to do that.

The Lions have the 20th and the 33rd overall picks in the draft, this leaves them with some flexibility to go after Josh Freeman (my personal pick) or another top QB at either 20 or 33 and still pick up a top notch DT (to replace Redding which is a must). Picking up Peterson throws the Curry talks out the window in my opinion.

Remember the Lions have two younger guys in Stanton and Henson who just might have the ability to take the starters job this year.

My take is after the jump. NickPampani and the St Louis Rams are on the clock.

Hard to argue with this one. Many draftniks have OT Jason Smith above Monroe, but not by much. Monroe is considered a franchise LT prospect and you can rarely go wrong with a guy like that. A safe pick IMO, and with the amount of money you have to pay the #1 over all pick safe is not a bad way to go.