We've got all 32 spots filled for our community mock draft and so we begin! 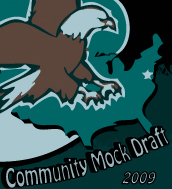 We're going to try to keep this going as briskly as possible, so when your turn to pick is coming up, keep paying attention to the site. When I announce the previous pick you are on the clock. You'll have 24 hours to make a pick or I'll step in and make it for you, but you can make a pick as quickly as you like.

At the moment the plan is to go one round, but if it goes quick and smoothly enough we might go for a second round. So if you didn't get a spot in the first round, keep signing up in the original thread for a team in the second round.

In the interest of keeping things uniform, I need you to email me your pick to BleedingGreenBlog at Gmail.com and put "Mock Draft #whatever your pick is" in the subject line.

Thanks for being a part of this and I think we're going to have some fun! With the first pick in the 2009 BGN community mock draft... Whodie126 with the Detroit Lions is on the clock!

The full order is after the jump.