Here's a look at what it would take for the Eagles to move up in next month's draft. (Iggles Blog) 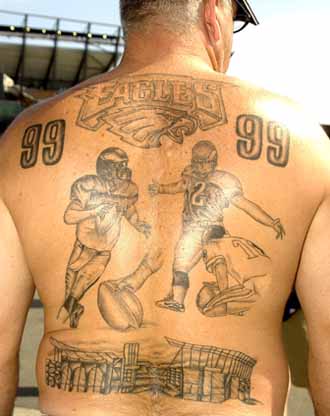 This guy thinks the book "Invincible" is better than the movie "Invincible." Probably true, but it doesn't sound like the book would make for a compelling wide release movie. (Eagles Eye)

Is the reason the Eagles organization always under fire simply an image problem? (Eagles Gab)

Dave does a nice job putting the facebook firing incident in perspective. (Don't Boo the Birds)

Some reassuring stats for those upset by the "No Country for Old Eagles" campaign going on this offseason... (Inside the Iggles)

A "source" tells me that Pro Football Talk swung and missed once again. (The Wayne Fontes Experience)

Since everyone is talking brackets this time of year... How about this tournament of the most hated person in sports? (3rd String QB)

Is Tarvaris Jackson so bad that free agents are scared off from signing in Minnesota? (With Leather)

The NFLPA has hired a new leader, and he's some lawyer. So much for having a player leader the player's association. (Philly.com)

Finally, I agree with this title... Megan Fox is ridiculous. My goodness... (WWTDD)