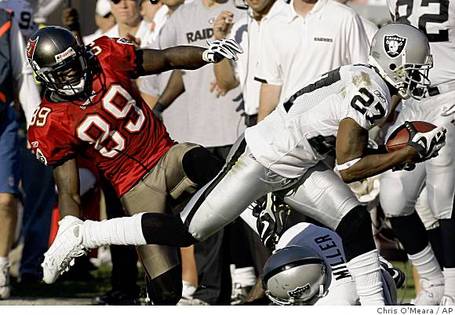 The Eagles have announced that they've reached a one year deal with free agent S Rashad Baker. The 27 year old has spent time with Buffalo, New England, and most recently Oakland where he nabbed 3 INTs last year.

Baker is a local guy from Camden, NJ.

Obviously this is a move for depth. By adding a potential starter in Sean Jones and a depth guy in Rashad Baker, the Eagles have replaced the roster spots vacated by Dawkins and Considine.

If the Eagles were to draft a safety next month, Baker would like battle it out with the pick for a roster spot.

Thanks to capt Nodar for the tip