Share All sharing options for: Football 101 - Defense: Base 4-3 Defense 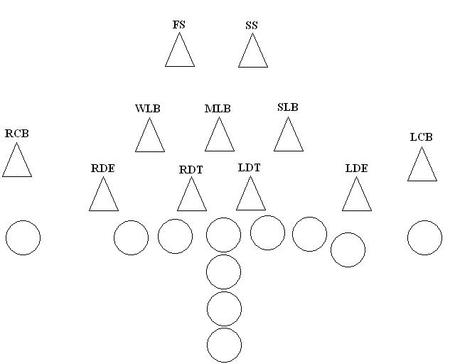 A few weeks ago, I started up the Football 101 posting series with an initial post dealing with technique and gaps.  Once free agency approached, I decided to hold off on moving further into the series to concentrate on the latest rumors and signings that the Eagles were involved in.  Now that the initial frenzy is winding down, I’m going to get back to the series and get our general football knowledge database well stocked.  If you’re new to the site, you can read my introductory post here and also the first post of the series here.  Also, now that there’s more than one post and the series will be filling up fast, I’ve added a new Section on the left side of the BGN homepage to keep things nice and organized for you.  Today’s topic is going to be the Base 4-3 Defense.

So where did this defense come from?  Originally, NFL teams utilized five man lines with two linebackers.  There are three common people associated with switching to a four man line with three linebackers; Tom Landry, Bill George, and Garrard Ramsey.  Garrard Ramsey is said to have installed the 4-3 defense while coaching the Detroit Lions in the 1950’s.  Tom Landry is credited with utilizing the 4-3 defense while holding the role of Defensive Coordinator for the Giants in an attempt to stop Jim Brown.  Finally, Bill George is credited with being a player that instituted the change by necessity in the middle of a game.  George and the Chicago Bears were playing the Philadelphia Eagles.  George’s position was basically the middle defensive tackle.  He realized that the Eagles kept dumping short passes about five yards beyond the line of scrimmage in the middle of the field (where there was no defensive player).  Instinctively, he dropped back from his position at the snap instead of rushing the quarterback and was in position to intercept the pass.  From that point forward he lined up in what now is the middle linebacker position.

Responsibilities at the Snap

Alright, let me preface this by saying that these are responsibilities in a basic 4-3 defense.  I’m quite sure that each incarnation of the 4-3 defense has tweaked pieces here and there, but at least these will give you an idea of what each player should be trying to accomplish at the snap of the ball.

Left Defensive End – The LDE lines up either over the tight end or just on the outside shoulder of the tight end.  Their first responsibility at the snap of the ball is to jam the tight end so he doesn’t get a clean release against the SAM.  From there he needs to immediately diagnose the play.  Weather it’s a pass or run, his primary responsibility is to rush the outside gap.  If it’s a pass, the LDE turns into a pass rusher whose prime target is the quarterback.  On rushing plays, the LDE’s goal is to either tackle the running back at the line, or at least force the running back to run east and west rather than north and south.

Left Defensive Tackle – The LDT can use a number of techniques at the line, but their primary responsibility is to the B gap to either stop the run or to penetrate the offensive line and pursue the quarterback.

Right Defensive Tackle – The RDT can use a number of techniques at the line, but their primary responsibility is to the A gap to either stop the run or to penetrate the offensive line and pursue the quarterback.

Right Defensive End – The RDE is responsible for the C gap.  He has a similar role to the LDE without the tight end interference.  Ideally, the RDE is the most accomplished pass rusher of the defensive linemen.

Strong-side Linebacker (SAM) – The SAM lines up about five yards off the line of scrimmage.  On a running play, the SAM is responsible for the C gap on the strong side of the formation.  On a passing play with one receiver on his side, the SAM covers the Curl route.  If there is an additional receiver on his side of the formation, the SAM ensures that the slot receiver stays outside the hash marks to be picked up by the strong safety.  The SAM will always cut his route coverage at 15 yards beyond the line of scrimmage and won’t cover vertical routes.

Middle Linebacker (MIKE) – The MIKE lines up about five yards off the line of scrimmage.  On a running play, the MIKE is responsible for the A gap.  During a passing play, the MIKE trails the TE for five yards, not allowing a hot read or a hook.  If the TE goes beyond five yards, the MIKE releases him and becomes a rover in the center of the field taking responsibility for anyone who enters his zone.  The MIKE will also not pursue vertical routes.

Weak-side Linebacker (WILL) – The WILL lines up about five yards off the line of scrimmage.  On a running play, the WILL is responsible for the B gap.  On a passing play with one receiver on his side, the WILL covers the Curl route.  If there is an additional receiver on his side of the formation, the WILL ensures that the slot receiver stays outside the hash marks to be picked up by the free safety.  The WILL will always cut his route coverage at 15 yards beyond the line of scrimmage and won’t cover vertical routes.

Strong Safety – The SS lines up about twelve yards off the line of scrimmage.  On a running play, the SS acts in run support with the SAM.  On a passing play, the SS is responsible for picking up a vertical TE and will also push everything outside of the hash marks.

Free Safety - The FS lines up in a similar fashion to the SS and has similar responsibilities.  Usually the FS has better coverage skills.

Cornerbacks – Both the LCB and RCB have the same responsibility.  They will line up across from the primary receiver on their side of the field.  At the snap, their goal is to force the WR to the inside, and not allow them access to the sideline.  As soon as the receiver commits to the inside, the CB looks for the ball to be delivered.  On a running play, the CBs are outside containment and turn the play back toward the middle of the field.  If the pass play develops to the point that the CB takes more than three steps, their responsibility becomes covering the deep out and allowing the safety above them to take the role of deep coverage.

So there you have it; the down and dirty of the 4-3 defense.  If you just take the coverage layer by layer and go through it, it’s actually a pretty easy defense to understand.  Hopefully, this will give some people a little better perspective on what should be happening on plays.  Thanks for reading!