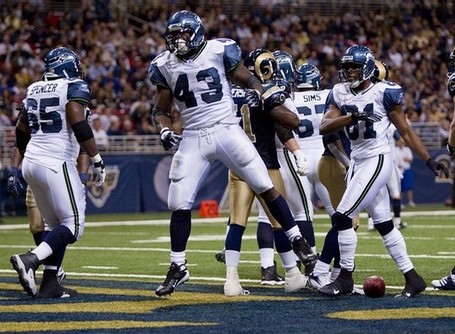 Speaking to Dave "Softy" Mahler this afternoon on Seattle's 950 KJR ESPN's John Clayton reported that free agent FB Leonard Weaver has been in talks with Tampa and Philadelphia and could be on the verge of signing with the Eagles.

He had a visit in Philadelphia, I know he had a visit in Tampa Bay. I don't think he's going to get the Greg Jones numbers, that's about 2.52 million a year but he's going to get something respectable. I would not be surprised if he gets a deal done today in Philadelphia. That would be a team that really has not been with a fullback all last year, I think he could add some versatility. You can see they're making some changes with the Eagles with Tra Thomas gone, Correll Buckhalter gone, they're not going to bring back Jon Runyan.. but he can kind of fit in there and run the ball a little bit along with catching it so he's on the hot list today to see if he signs with the Philadelphia Eagles.

I've been beating the drum for Weaver since before free agency started... so if this is indeed true I'd be thrilled with the signing.

You can listen to the full interview here.