Donovan McNabb on the departures of Dawkins and Thomas

Share All sharing options for: Donovan McNabb on the departures of Dawkins and Thomas 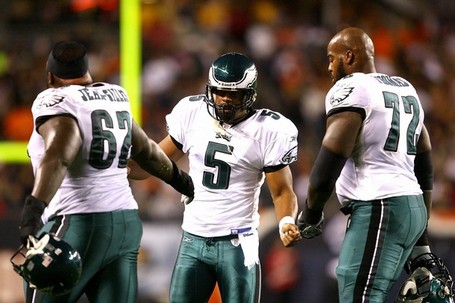 Donovan McNabb recently shared his feelings on the departure of the only two teammates he's had his entire Eagles career.

I usually don't remark about teammates unless asked but I felt it was necessary to share my thoughts on a couple of teammates that are no longer in Philadelphia. I have been a part of the Philadelphia Eagles for 10 years and I have not played a game, attended a practice, sweated in training camp, built a playground or participated in a Carnival, and more importantly dreamed of a championship parade, without Brian Dawkins and Tra Thomas being a part of it. We all had a goal of bringing a championship to this city and while we didn't achieve that goal, we have had a lot of successes during our time together. I was always confident that Tra had my blindside. When he was out there it was one less thing to worry about. As for Brian, mere words cannot explain what he has meant to me, our team, and the City of Philadelphia. He and I shared many things besides a locker room. We shared a passion for the game, a desire to make a difference, and dreams for better things.

There may be other men to come in here and play these positions and hopefully we can share successes. I will always regret not having the chance to win a championship with these guys.

It is important to note that I also will miss playing with a few other guys as well. Correll Buckhlater, Lito Sheppard, Greg Lewis, and Sean Considine will all be missed and I do wish them all success.