The latest overblown McNabb story this past week was some over some comments he made while at the superbowl. Honestly, it seemed to me be little more than a factual recap of the game... but some people took it as McNabb throwing his defense "under the bus." 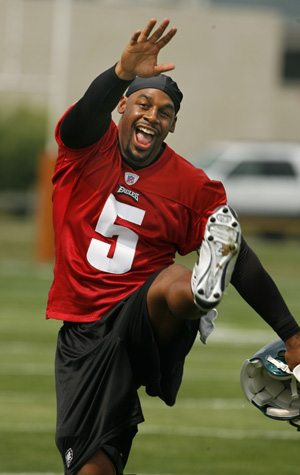 Certainly many opinions were shared on all sides.

Former teamates turned local sports radio hosts Jeremiah Trotter, Ike Reese, and Hugh Douglas were more or less the root of the mini controversy and felt their former teammate was blaming the defense for the Cardinals loss and wants out of town...

In what is hopefully a period on the story, we hear from Donovan McNabb himself.

"It's unfortunate you know that they would say that, but you know everybody has their own judgment, I guess," McNabb told CSN’s Kevin Walsh during Saturday’s Villanova-Syracuse game. "The only people I truly care about at this particular point are the people that are putting on the uniform, who’s been in the locker room, who’s been through the ups and downs. That’s all that matters to me. Anyone else I don’t care about.

"As long as the guys in the locker room understand what I was saying, and they do, that’s all that matters. They know I don’t throw people under the bus. I never have, never will, so they understand exactly what I’m saying."

Plus he repeated the "I want to retire an Eagle" line.

The always brutally honest and actual current teammate Sheldon Brown also told Howard Eskin this week that he had no problem with McNabb's assessment of the game.