Share All sharing options for: Reid speaks at Pro Bowl

Jim Johnson is not with the Eagles coaching staff this week due to his cancer treatment, so Reid has some thoughts about Jim and his understudy Sean McDermott 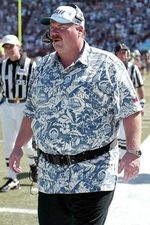 "Jim's in a great frame of mind," Reid said. "He'll be ready when we get back there. Sean's going to do it here, so we're all set for now."

Reid expressed confidence in McDermott's ability to handle the job as long as necessary.

"Sean's been an understudy of Jim's for a number of years, and he works so hard," Reid said. "He's coached all the positions except defensive line."

"We're going to run it 400 times," Reid said. "At the team meeting, I asked him how much he wanted to carry it. He said 'every time.' He's bright-eyed, vicious."