PFT is reporting that offensive tackle Stacy Andrews has agreed to terms with the Philadelphia Eagles. 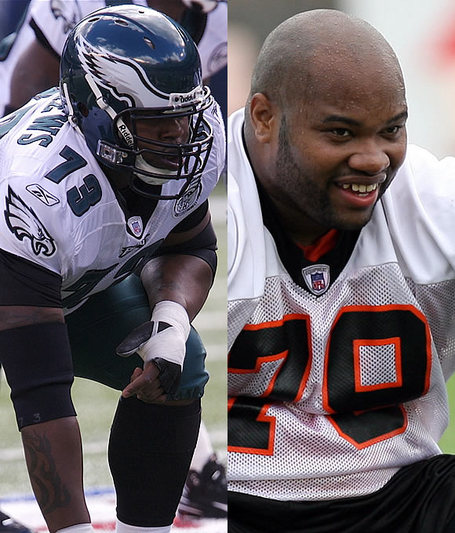 Andrews is a RT who will be 27 years old this year. He's also the brother of Eagles pro bowl guard Shawn Andrews.

Sources says the deal averages $7 million per season. Andrews suffered a torn ACL in the next to last game of the year and had surgery in early January. He was expected to be ready to go by training camp, but he says he's ahead of schedule.

"The rehab is going great and I'm way ahead of schedule. My goal is to be practicing during minicamp," said Andrews while taking a break at Paul Brown Stadium. "It was frustrating a little bit due to the fact that it was five quarters away from the end of the season. As soon as it happened, though, it flashed through my mind that everything happens for a reason. I kept a positive head about it and haven't been down since."

The other fortunate thing about Andrews' injury is that it happened to his right knee. On the line, tackles use their left leg as the plant leg on blocking, which bears the most weight.

Massive lineman maturing at the right time. Long arms, huge hands. Started as a guard, but "broke out" at RT. Can play either guard spot. Very powerful with great upper and lower body strength. Rare speed for a man of his size. Technique needs work. Inconsistent in short career, but could develop into an elite player in the coming years. Sounts inc ranks him as the 14th best tackle in the NFL.