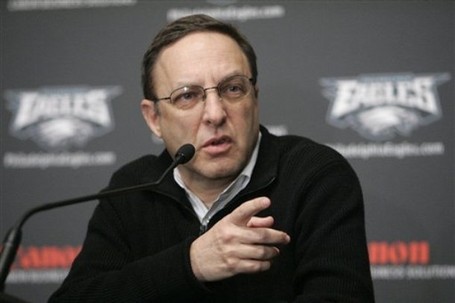 Rich Hoffman wrote about the general lack of good free agents and the wealth of cap room around the league.

The salary cap has grown so much, and teams have become so adept at hanging on to their own good players, that free agency for many has become an exercise in marginalia

Second, for want of a better description, more and more teams around the league have begun to act like the Eagles. That is, they lock up the players they really want to lock up and do it sooner than before. They know what the players know: That the injury risk, so severe in the NFL, can rob a player of his big payday. So they make good-but-not-great offers and the players take them for the security.

Hoffman repeated Joe Banner's assertion that the Eagles, like most other teams in the league, have more money under the cap than they can spend. The cap has risen so quickly and so few players are getting to free agency that it's becoming commonplace for teams to be tens of millions under the cap.

Les Bowen warned fans not to expect the kind of quick moves this year that the Eagles made in free agency last year.

A YEAR AGO, the Eagles kicked off free agency by signing the top player available, cornerback Asante Samuel. They went on to take a run at Samuel's New England teammate, wideout Randy Moss, before Moss decided to re-up with the Patriots.

Hard to see anything like that happening this year, when the free-agency period begins at a minute past midnight tonight. The Eagles don't have a pressing need at linebacker (for Baltimore's Ray Lewis) or defensive tackle (for Tennessee's Albert Haynesworth). Those are the top names. Elsewhere, there really isn't much to excite a fan base, after last week's franchise tagathon, which resulted in 14 players leaving the market via the tag. Channel 10 has reported that the Eagles had hoped to sign tight end Bo Scaife, who ended up getting tagged by Tennessee.

Undoubtedly these guys are correct about the economy of the NFL. Free agency is not what it once was... but that doesn't neccisarily mean the Eagles won't be aggressive What do you think?