The Eagles are in negotiations with LT Tra Thomas, but according to Thomas the talks are moving slowly. 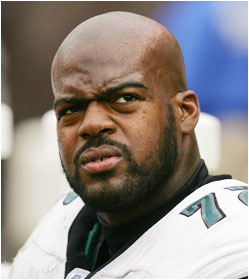 "I would love for the Eagles to step up to the plate to get it done," Thomas said following his afternoon workout at the team facility. "If not, I'm ready to move on. It's weird, but it's also exciting. I haven't been in this position for a long time. For 11 years, I've always known what would take place next year."

The Sporting News is reporting that T.J. Houshmandzadeh is the #1 free agent target for the New York Giants. The report also lists the Eagles, Ravens, 49ers, Dolphins, & Seahawks as interested in the free agent WR.

Since Philadelphia's on his list (whether anyone will say it out loud or not), you start connecting dots. The Eagles are trying to move disgruntled CB Lito Sheppard. Would Sheppard and getting your own first-rounder back from last year's draft-day trade do the trick? It's the 28th overall pick. If it was Philadelphia's 21st, would that change your mind? If next year's game was there instead of here, would it matter? And does QB Jake Delhomme get a vote? He'd be all for not having to throw in Sheppard's direction.

Our pals over at the Panthers blog Cat Scratch Reader would be into this deal.

Finally, according to his agent free agent FB Leonard Weaver is likely to leave Seattle.

"As far as him staying in Seattle, I'm sure Leonard would be very happy," Harold Lewis told Pro Football Weekly. "But just being a realist, I don't see it."