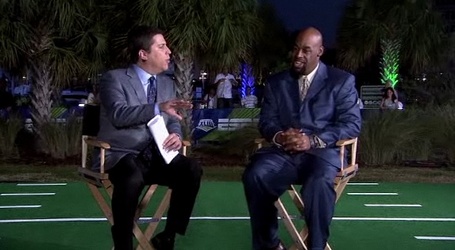 Piggybacking on the earlier report by ESPN's Michael Smith about McNabb's supposed conditions before signing an extension, GCobb says he's done some "background work" and knows exactly what players McNabb wants the Eagles to get.

He said McNabb would be happy with guys like Anquan Boldin, Tony Gonzalez or T.J. Houshmanzadeh but he’s not going to be happy with somebody’s discarded number two or number three receiver.

He also mentiond that being committed to winning a Super Bowl doesn’t mean trading out of the first round and drafting an offensive lineman every year.

First, Cobb forget the "D" in Houshmandzadeh. And the "E" in mentioned... Hopefully McNabb didn't when he submitted his list of demands... lol

Seriously, I find this report very dubious. I have a feeling G just made up the list himself and listed some of his own frustrations. The obvious part is where he lists "drafting an offensive lineman every year" as something McNabb doesn't want.

If there's anyone on a football team that values offensive lineman, it's the quarterback. I have a feeling that McNabb would be very happy to see the Eagles draft an offensive lineman given the fact that he'll probably lose of one his tackles this year and the one that does stay will be in his mid thirties...

A quarterback NOT wanting offensive lineman? Sorry G, that's just too much of a stretch for me to believe.