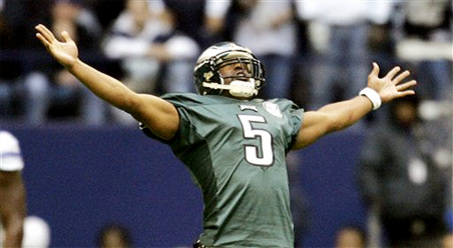 According to ESPN's Michael Smith, who is known to be close to McNabb, says that Donovan McNabb will hold off signing any extension until he sees that the Eagles are aggressive in upgrading their offense this offseason.

He also broke the story that the long rumored meeting between McNabb & the Eagles' brass took place last week before they left for the scouting combine. While at the combine this weekend, McNabb's agent denied that this meeting took place.

Independent of the meeting, the source said that McNabb may hold off on further extension talks until he sees how that Eagles improve themselves in the offseason via free agency and/or trades.

I have a few thoughts on the report. First, it was McNabb who wanted the extension in the first place. It would seem odd for him to state publicy that he was looking for an extension, then demand a meeting with the top brass to tell them he wants this extension but only if the team is aggressive in the offseason.

That said, the story does seem to imply that his "demand" for more weapons was not part of the meeting... which makes the story all that more odd.

Honestly, if this really is true... I'm actually kinda happy to hear it. Don't we all want more offensive weapons here? Don't we all pretty much agree that the defense carried this team most of the year while the offense floundered? Frankly, if it takes a demand by McNabb to get this team to add playmakers on offense... fine. I don't particularly care how or why the Eagles upgrade the offense, I just want it done. So if this report motivates the Eagles to make sure they lure TJ Houshmandzadeh here or to pull the trigger on a trade for a guy like Tony Gonzalez... great!